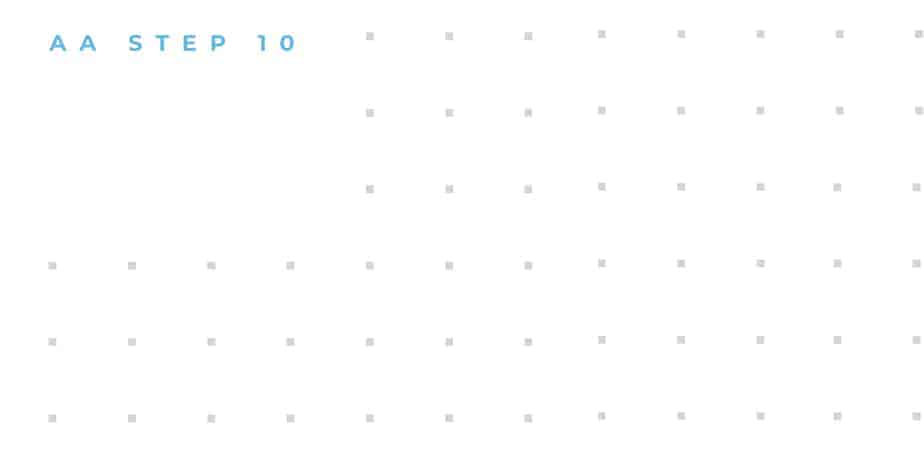 In AA step 10 is the beginning of the “maintenance” steps. In the Big Book of Alcoholics Anonymous, step 10 reads:

“Continued to take personal inventory and when we were wrong promptly admitted it.”

Step 10 should begin while we’re working through our amends in step 9. You don’t have to wait until you’ve completed all your amends to begin step 10.

In fact, it says this in the Big Book, it says, “We vigorously commenced this way of living as we cleaned up the past.”

It took me 8 years to complete all of my amends, but I started working step 10 when I had about 45 days sober.

There are 3 different types of inventories that make up this step:

The nightly inventory is explained on page 86. This is something that, in the beginning of AA, was done in the evening, but today you can do it whenever you want.

The goal is to do it at least once every 24 hours.

You ask yourself these questions:

The idea is that, if you answer these questions once a day, you’ll do a sort of mini step 4, reviewing your behavior to see if there’s anything that might block you spiritually.

Some people write their nightly inventories down, but it doesn’t say in the book that we have to do this, so some people will do them in their heads.

Either way is fine. You just do what works for you.

However, just going over these things is insufficient. Action has to come after.

If you find that you were resentful or afraid during the day, maybe you need to call your sponsor or someone in the program to talk about it.

If you owe an apology because of something you did that day, then you definitely need to talk that over with someone and then make the amend.

The benefit of this inventory is that it keeps us grounded, day after day, in the life of the steps—making amends when we cause harm, continuing to find things that might block us off from sobriety, happiness, peace, and our higher power.

The drawback is that it happens only once a day—sometimes, we need to respond to a spiritual problem more quickly.

That’s where the spot check inventory comes in.

The spot check inventory appears on page 84 of the Big Book. It says:

The benefit of this inventory is that it happens (ideally) as soon as a problem occurs. We might find ourselves acting selfish or dishonest. Hopefully, we recognize it immediately.

The reason this inventory is so useful is that it squashes problems fast. You don’t sit around in a resentment or a fear all day long, waiting for the chance to write it down. You take care of it immediately.

It also makes you a better person because it pushes you to make amends quickly, and again, not wait to write it down at the end of the day and then deal with it later.

However, there is an even faster—and in my opinion, better—type of inventory.

After spending years in AA, step 10 became something that I learned a lot about (and came to hate).

I hated it because it basically made me feel like a piece of shit.

I was constantly finding myself afraid, or resentful, or whatever—character defects that I thought I had gotten rid of in step 6 and step 7 were still there, and they were causing me problems.

These regrets mounted and turned into amends that I owed, either to myself or to other people.

Writing it down and taking care of those amends were okay I guess, but it was this constant cycle of me not changing, me making mistakes, and then me having to make amends, and then it would start all over again.

What I started doing was shortcutting this whole process by learning to take inventory instantly, often to the point that I was able to not let these problems crop up in the first place.

Essentially, I would freeze.

What this did is to buy me time to get to someone to talk to.

This stopped the cycle before it could start. I would now be able to keep from making things worse.

What I was doing is taking the spot check inventory and using part of it right away—identifying the problem and praying—and then stopping whatever I was doing so that I didn’t make things worse.

This saves me so much pain I can’t even describe it. It makes life so much easier.

In AA step 10 and step 11 should happen simultaneously.

You begin them both as a new way of living.

But if you haven’t started your 9th step yet, you shouldn’t be doing either of these steps.