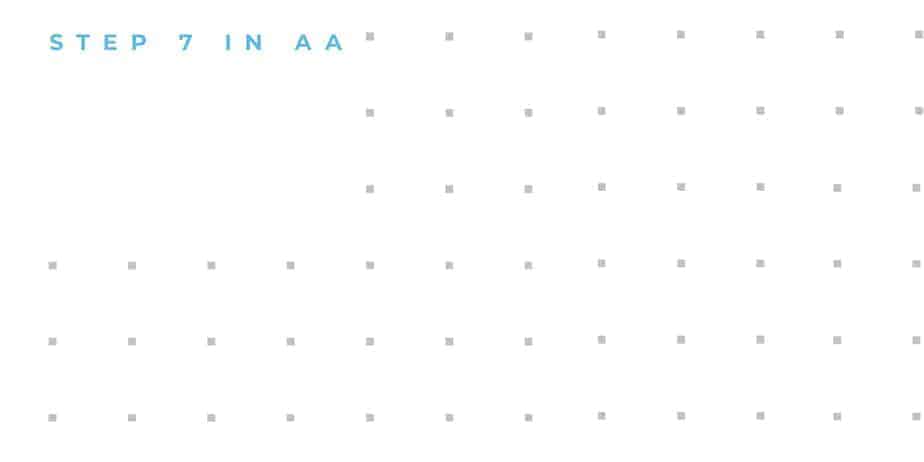 In AA, step 7 is closely aligned with step 6.

A shortcoming is just another word for a character defect, which is a phrase that means, “a fault in the way we act.”

So if step 6 says, “Become entirely ready to have god remove these defects of character,” then what’s the difference between that and the actual asking?

The difference is action. The act of prayer—of asking—and then the action of actively trying not to engage in the behavior.

When we get to this point, we must have become willing—to some degree—to have our defects of character removed.

We must have become humble.

In AA, Step 7 Is About Humility

Humility means looking at ourselves as we are—not as we wish to be or as we imagine ourselves to be.

If we’re going to ask to have a character defect taken away, we must first recognize it as a problem. That’s step 6. We’re becoming humble in step 6, becoming able to see our character defects for what they are.

We are admitting that we are liars, or cheaters, or thieves, or hypocrites, or whatever the case may be.

When we get to step 7, we have become humble. The process has been completed to some degree. We’re ready for some portion of the defect to be taken away because we see it as it is—and we’ve decided that it’s objectionable.

How do we actually work step 7?

We ask our higher power, whatever it happens to be, to remove the character defect.

But there’s more to it.

We have to be willing to actually do something about it.

We have to try to stop.

If we are liars, we don’t just ask our higher power to make us stop lying and then hope for the best.

We try not to lie.

But what if we’re not entirely ready?

Are we stuck on step 7 for eternity?

Do we have to be ready to stop lying completely, for example, in all aspects of our lives, including little lies that keep us from hurting people with harsh truths?

Do we have to be ready to stop lusting completely, to never look at someone we’re attracted to ever again?

Where is the line drawn?

I think we draw the line wherever we and our sponsor decide it should be drawn. I think it’s different for every person. I think that, for example, a thief who decides they will at least stop stealing from friends and family is better than a thief who does.

It’s progress, even if they still struggle with shoplifting.

If this person has become ready to have this portion of their defect of character taken away, that they are ready to ask for that portion to go, that they can work step 7 around that character defect to the degree that they’re willing to.

They’ve become humble around this portion of themselves. They’ve seen the truth of what they’re doing. They’ve become tired of hurting their friends and family.

They want to stop.

Then, they try to stop.

They make amends for what they’ve stolen.

They repay or return the items.

I think this is a good thing.

I think someone who stops cheating on their spouse, even if they keep looking at people they probably shouldn’t be looking at—even if they’re flirtatious as hell—should be congratulated for no longer cheating.

I think someone who lies constantly should be congratulated if they stop lying at work, even if they still lie at home.

I think we should be happy for people when they progress.

The word progress implies that we’re moving forward—and that there is more progress to make. Step 7 is a step that we continue to work throughout the rest of our lives.

We continue to work step 7 as we work the rest of the steps.

Sure, it’s great when someone who is stealing stops stealing from friends and family, but shouldn’t we want them to stop with the shoplifting too? Maybe they can’t do it now, but what about in a week? Or six weeks? Or six months?

Shouldn’t we want to keep progressing?

I think the answer is yes. We want to keep working on character defects, even if we make significant progress on them.

So, how much do we need to progress before we go on to step 8?

I think this is a difficult question.

Steps 6 and 7 are steps that, once begun, continue for the rest of our lives, one day at a time.

If we wait for all our character defects to go away before starting our list of people we owe amends to, we’ll never make any amends.

We would have to become perfect human beings with no character defects first.

Step 8 Should Be Started Immediately After Step 7 Has Begun

Once we begin step 6 and 7, we should immediately start step 8.

There’s no reason to wait.

Step 8 is, “Made a list of all the people we’ve harmed and became willing to make amends to them all.”

The people we’ve harmed have been waiting—days or weeks or years or decades—for us to apologize for the harm we’ve done.

It’s unfair to them to work on ourselves for weeks or months or years before making our apologies.

Besides, step 8 is just a list. It’s just a document, a piece of paper.

We’re not actually apologizing for the harm we’ve caused yet.

Which means we don’t have to get fearful.

Not just yet anyway.

So we start step 8, realizing that steps 6 and 7 are going to be happening side by side with this new step we’re working on.

This makes sense if you think about it. Step 1 is a step we continually work. We have to always be aware of our powerlessness, be aware of how unmanageable our lives can be if we go back to the way we were living. If we stop this, we’ll go back to drinking or getting high.

We have to keep working step 3. We have to keep being willing to turn our will and our lives over to this higher power, even if that just means we are staying committed to working the 12 steps (or recommitting when we fall off).

These are all ongoing steps.

Steps 6 and 7 are also ongoing steps.

What is your experience with steps 6 and 7?

I’d love to hear it.