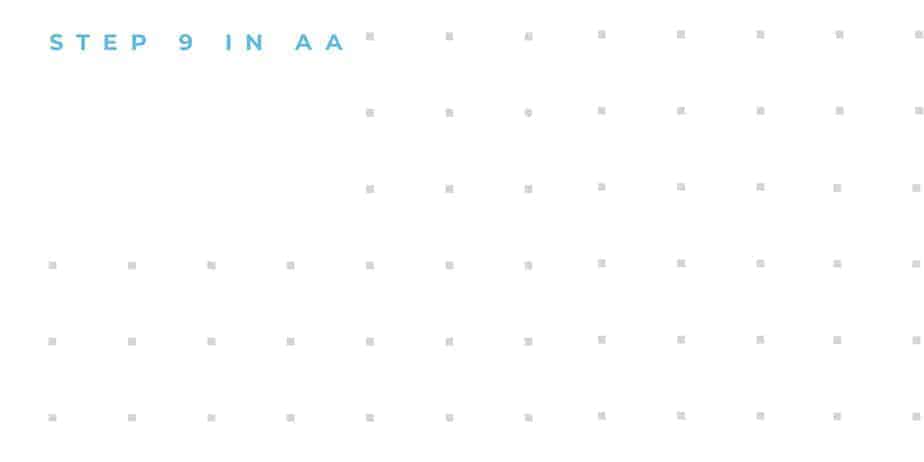 In AA step 9 says we, “Made direct amends to such people wherever possible, except when to do so would injure them or others.”

In AA step 9 is humbling, and it’s hard, but thankfully, if we’ve worked through Step 8 with our sponsor, then we’re prepared. Step 8 is when we make our list and write down all the people we are or aren’t going to make amends to.

Now we have to actually go out there and do it.

I won’t lie to you. I won’t tell you this is easy. I won’t pretend that it’s always going to go well.

But mostly it is.

The thing I heard the most when I got sober and made amends was, “just keep doing what you’re doing.”

They want you to get sober.

They want you to stay that way.

The second most common thing I heard was, “stop hurting people.”

For many of us, that’s what we really need to do. We need to stop causing harm.

In AA Step 9 Starts With Outreach

Before you can make amends to someone, you have to make sure they even want to hear your amends.

You have to reach out. This can take a variety of forms.

If the person you owe amends to is also in AA, then step 9 is something they’ll understand and (hopefully) be willing to participate in.

If they’re working a good program, they’ll be willing to hear what you have to say.

If the person isn’t in AA, there’s a process I recommend for reaching out.

First, write down what you’re going to say. It should look something like this:

“[Person’s Name], I owe you an apology for how I treated you in the past. Would it be possible for us to meet up or talk over the phone?”

At this point, it’s out of your hands. You have given them the option to hear your apology.

Now they get to speak.

I’d say about half the people I owed amends to didn’t want to hear it.

I heard a lot of variations.

“I don’t want to talk about high school.”

Usually though, there was just silence. People just didn’t respond.

For me, that’s great, because I hate making amends. It’s humbling as hell. To have to look someone in the eye and tell them that you were wrong, that you regret the harm you caused—that takes you down a notch (or three).

So when someone wasn’t interested in hearing what I had to say, I was fine with that—and so was my sponsor. It meant that the amend was done.

If a person doesn’t want to hear what we have to say, we don’t bother them or hound them.

Now there’s a caveat to this.

If they come back one day and are ready to hear our amend, we have to do it.

However, you’re going to get a lot of people, usually friends and family you’ve burned in some way, who are going to be willing to hear what you have to say.

You have to actually do this thing.

First, you need to figure out where or how to meet. If it’s not safe to meet in person for some reason (or they don’t want to meet in person), then you can make the amend, ideally, on Zoom or FaceTime or something like that.

If they’re not willing to do that, then making the amend over the phone is appropriate.

If neither of these are possible, the Big Book says you can send a letter.

Sometimes a letter is appropriate for someone you can’t get ahold of otherwise, but that’s really rare. The only times I’ve ever needed to write a letter was for someone who passed away. In that case, I read the letter at their gravesite and burned it.

If you’re doing it in person, unless it’s someone you know really well, it’s usually a good idea to stay safe and meet somewhere in public.

Not to scare you, but you never know how someone is going to react. Don’t assume that it’s always going to go well, because it might not. If that’s the case, it’s good to be somewhere where you can leave quickly if you have to, like a coffee shop.

Sometimes, it’s just awkward, so you don’t want to do it over dinner—then you have to sit through the dinner and deal with the awkwardness you could have avoided if you’d just gotten coffee with the person.

Let’s assume you’re going to do it in person or over the phone.

This process is specific. There are reasons for each one of these items. For example, in step 3, we ask “is there anything” because, in many cases, there’s nothing you can do to make it right.

If you cheated on someone in the past, you probably can’t make that right.

We say “begin to make this right” because you may not be able to do anything right now to make it completely right, but you might be able to make a start.

But the main reason to use this process is to give you a structure. Structure helps you to feel like you know what you’re doing. It removes some anxiety from the process.

One thing to note here: if they ask you to do something crazy to make it up to them, like they want you to kill yourself or something really rude like that, you say, “I’ll discuss that with my sponsor.”

I know this example seems extreme, but I know people who’ve gotten this one before, so you have to have an answer ready just in case—some people can be really vindictive when you make amends to them.

At this point, you’re done! It’s the best part of making an amend.

And if you want, you never have to see this person again.

I made a lot of amends and got the hell out of there. I had no desire to ever talk to those people again. I did my part—that’s all you have to do.

For others, it was the beginning of the healing process, and some turned around relationships that I thought were lost to me, especially with family.

In AA Step 9 Is an Ongoing Step

This step can take time—a lot of time.

It took me 8 years to make all the amends I owed from my original list.

However, this doesn’t mean I waited 8 years to move through the rest of the steps.

How I Stay Sober

I do a lot of things to stay sober each week.

Learn more about what I do to stay sober week after week.

D8 — A Comprehensive Guide to Delta-8-THC

D8, also known as Delta-8-THC, is a derivative of the hemp plant that has similar effects to the active ingredient in marijuana — THC. And yes,…

According to the experts, spiritual fulfillment always has to do with a poorly defined definition of what the spirit is — namely, that it’s something…