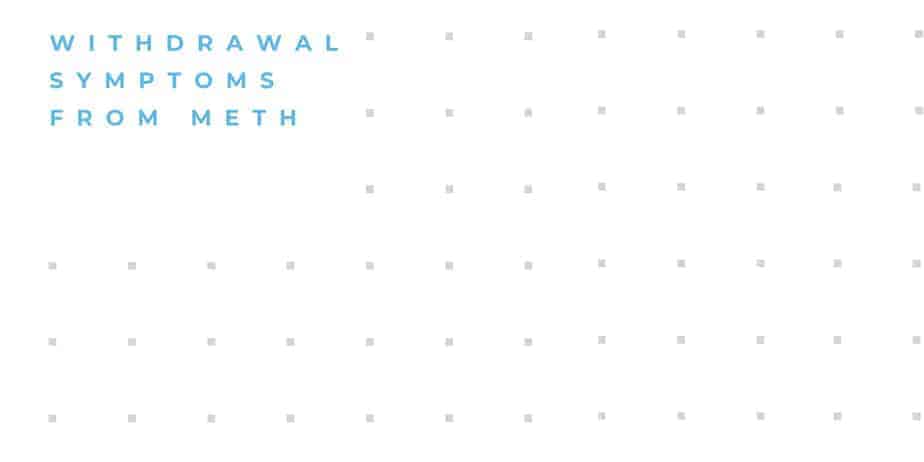 If you’ve read my meth addiction story, then you’ll know I’m especially qualified to talk about the subject of withdrawal symptoms from meth.

Withdrawal from meth? That’s right! For many years I was under the impression that the worse substances to withdraw from were alcohol, benzos, and opiates.

I mean what could be worse than going through withdrawal from a 2-year, everyday heroin addiction? Nothing… right?

So we’re going to dive into this subject, and I’ll give you my personal experience along with some observations made by people in the field of addiction.

So without further adieu, let’s get this train choo-chooing!

The Withdrawal Symptoms of Meth — What the Experts Are Saying

Meth is a man-made stimulant that is made in dangerous labs using different substances that one can purchase at a pharmacy.

However, it is currently being manufactured by bigger enterprises across the world. It has come out of the underbelly of the rural country and into urban society and metropolitan areas.

A line or a few hits of meth can give you an intense high from 8 hours onward. However, once the user starts to come down, they can feel downright awful!

According to the pros, coming down is different from withdrawal, so let’s first talk about coming down.

Users coming down off a meth high experience hopelessness, anxiety, irritability, extreme exhaustion, muscle pain in the jaw, and other symptoms. These symptoms will eventually subside.

However, according to experts, users may have trouble coping with coming down, and this often leads to more meth use, which results in full-blown meth addiction.

So now let’s talk about actual withdrawal. Going through with withdrawal from meth is not physically dangerous.

It can, however, send an individual into a complete psychotic episode that can turn physically dangerous as many people will begin to harm themselves or at the very least have the desire to self-harm.

Within the first 24 hours of abstaining from meth, you can expect to start feeling withdrawal symptoms.

Meth withdrawal can last over 14 days, depending on how badly a user is addicted to it. 14 days is the common length of most users’ withdrawal experience.

But, you can get through it!

My Personal Experience with Meth Addiction

First, let’s take a look at the difference between a functional meth user and a meth user that’s fucked beyond belief.

I have met and heard of people who just smoke meth. They smoke it, they eat here and there, and yes… they go to sleep!

Many of these functional users have jobs that they go to regularly, and some of them can even take care of their kids. I know, it’s wild.

Many of us who take the drug using these methods stay up for weeks, not eating, barely drinking water, and going on crazy sex binges.

Well, what goes up must come down.

So, what is my personal experience with withdrawal symptoms from meth? Well, it ends up with me being up for 2 weeks, walking the streets, and being out of money.

Sometimes I would end up in jail.

The first thing is the insane psychosis I would experience when coming off of meth. I would see telephone poles and think they were monsters and yell at them.

I always thought people were following me (and sometimes they actually were, you’ll need to read my meth addiction story to get the low down on this).

Wherever I would end up, I was potentially violent and belligerent to anyone I talked to, especially my family.

Then comes the extreme exhaustion.

This exhaustion is incredibly heavy and unlike any I’ve ever experienced. I could sleep for days.

I remember one time I got arrested and tried to make them keep me longer in the city jail so I could sleep; however, they didn’t let me do this! Those motherfuckers!

Then comes the insatiable appetite. You can eat more chicken sandwiches from Burger King than you ever thought possible when coming off of meth, I guarantee you that.

And it sucks because the whole time you’re thinking, “Man, that 20 dollars could have gotten me some meth, but I just can’t get enough of the King’s french fries.”

Yes, it’s quite a predicament you may find yourself in.

At the end of it all I usually end up with super high anxiety and being suicidal, banging my head against the walls of a psychiatric hospital.

Well, that’s my story, and I’m sticking to it!

Chances are, you’re going to have trouble creating enough dopamine to feel happy after going through withdrawal from meth.

Depression and irritability can last for months after going through withdrawals. You need to be proactive and know what you’re up against.

Go to the gym, start running, eat plenty of foods high in nutritional value, and get enough sleep.

Meth is for sure the most addictive drug I’ve ever had experience with, and I’ve been addicted to pretty much all the major narcotics you could name.

Meth users have a high potential for relapse, and many find they’ve developed a sex addiction during their meth addiction.

This addiction usually needs to be treated with therapy and/or 12 step fellowships.

There is no shame in relapse—recovery from meth addiction can be very difficult, so if you fail, just get up and try again!

Are you having trouble with a meth addiction? Are you scared or concerned about going through withdrawal from meth? Did you enjoy reading this article? Let me know in the comments—I’d love to hear from you!

Thank you for sharing this article and your story – it was very informative. I recently took a college class on substance use disorders, and hearing stories from people who are doing well in their long-term recovery always makes me feel good for them.

Thank you for reading! Glad you found it useful.

Michael Palma is a drug addict in recovery who is passionate about recovery and recently has taken to writing about his own experience, strength, and hope and hopes to share this with as many people in recovery as he can. He has been a professional jazz pianist for over 20 years. He has performed with Wynton Marsalis, Jimmy Cobb (drummer for Miles Davis), Daniel Platzman (drummer for Imagine Dragons), Robert “Sput” Seawright (drummer for Snoop Dogg and Snarky Puppy), Greg Osby, and Terri Lynn Carrington to name a few.