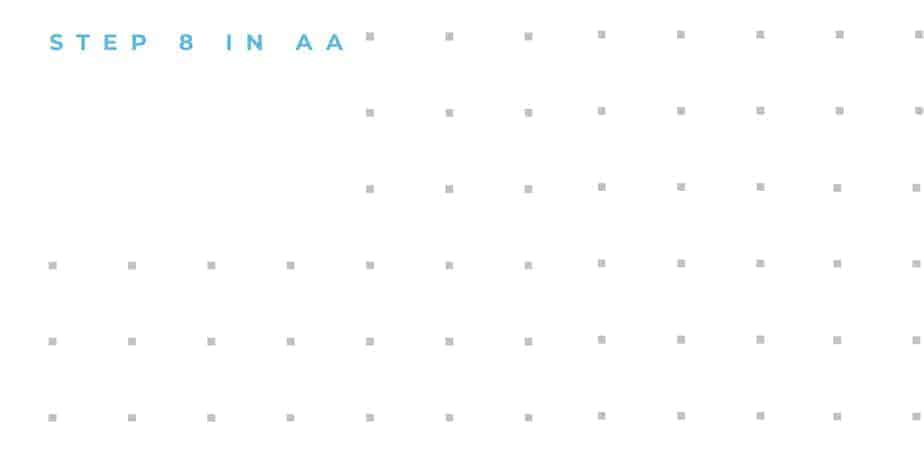 In AA step 8 is, “Made a list of all people we have harmed and became willing to make amends to them all.”

What scares most people is step 9—the actual making of the amends—and they usually let that fear keep them from doing the writing that step 8 requires.

Remember—you’re not doing step 9 when you get to step 8. You’re just writing. It’s just a list.

It can’t hurt you.

But it’s an important piece of paper.

Oftentimes, they do just that—they avoid writing down amends that they owe because they think there’s no point.

This is a mistake.

It’s a mistake because, in AA step 8 needs to be explored with your sponsor before any amends get made.

Step 8 Needs to Be Worked with Your Sponsor

Step 8 is work—absolutely. It’s work to write down all your amends. It’s work to figure out who you harmed and who you didn’t. It can be difficult to come to terms with the fact that you’ve hurt your friends, your family, people you cared about.

It’s not something you need to do alone.

That’s what a sponsor is for. Your sponsor is going to go through every amend you write down with you. At least, they should if they know what they’re doing.

As you go through each amend, you divide the amends into a number of smaller lists.

The first list you should make is arguably the best list—the people you can’t make amends to.

I will admit that there are people out there who are looking forward to apologizing to certain people in their lives. They want to make things right.

What I think is that they really want to make things go back to normal. Amends rarely do that. Instead, they may start the process of healing, but in some cases, they’re just not enough to fix what the addict or alcohlic broke.

That being said, the majority of people I’ve met aren’t looking forward to making amends at all.

So this list is awesome. It let’s you get out of some amends that you almost certainly don’t want to make anyway (because, if you’re sane, you’re probably scared of making amends at all).

Most people don’t want to make amends because they’re intensely confrontational, often emotional, and can end with serious bad feelings in some cases.

So this list is awesome because it keeps you from making a lot of these amends.

It might not be okay to make amends for a variety of reasons. You might want to avoid making amends to a previous significant other because they’re with someone else who wouldn’t exactly be pleased at their SO talking to an ex.

Or you might not want to make amends to someone because they don’t know how you harmed them (and telling them would make things worse, like if you secretly cheated on someone).

It might be the case that making an amend would put you in harm’s way, like making amends to a drug dealer you ripped off.

So this is the list you should start with—it will ease your anxiety.

The People Who Have Passed Away

This list is also awesome because you don’t actually have to confront anyone. That might sound callous, but it’s easier to go to a gravesite and apologize to a gravestone than it is to apologize to someone while looking them in the eye.

You can burn it if you want—or not. You can keep the letter. But the idea is that this list, again, eases anxiety because you now have some amends you can make but that won’t be as hard as in-person amends.

Amends That Are Easy—And That You’ll Make First

There’s no way to avoid the list that you’re afraid of, but this list eases you toward the hard amends. It also serves an important purpose—it tells you who you’re going to make amends to first so that you have a plan.

Having the plan takes away a lot of your fear because the unknown is erased. You know how it’s going to go down, and because this list is filled with easy amends, you won’t be as scared of making them.

This list serves another important purpose—it gives you a list of “practice amends” that, basically, you can kind of mess up and still not cause harm (or cause much harm if you screw it up).

For example, if you stole $50 from an acquaintance, and all you really have to do is pay it back. If you barely know the person, this should be a relatively straightforward event, especially if that person isn’t known to be violent.

Or maybe you just lied to your parents about something minor and mostly treated them okay. Maybe you were a jerk one night to someone while you were drunk, but mostly you just said something rude, so that person isn’t really that mad.

All of these are easy practice amends. You just pay someone back, or you tell them you were wrong to steal from them, or both. There’s not much to it, so you have little to fear.

Amends That Are Hard and That You Can Screw Up

This list is the last one you need to make. It includes people that you screwed over badly—and usually who know about it.

This might be your kids you abandoned because you were drunk all the time. It might include a wife you cheated on constantly who knew all about it. It might include someone you beat badly, or who you stole from for years.

It might also include amends that can get you in serious trouble but that you nevertheless need to make, like cheating in a class in college (that, if you admit, could get you kicked out), or making amends to a business you robbed.

It also includes the amends that are just hard in general, like amends to parents you lied to and stole from for years or decades, or amends to a husband you were never around for because you were always high.

But you have to remember here that this is just a list. This is step 8—not step 9. You’re going to start with easy amends, and you’re going to have practice before you make these ones.

You’re going to know what you’re doing, so you don’t have to worry quite as much about these ones, even if they’re difficult.

In AA Step 8 Is Easy Because You’re Just Writing, but It’s Dangerous to Sit on It

You have to make the amends.

I do a lot of things to stay sober each week. One of them is working the amends.

Learn more about what I do to stay sober week after week.