Home » Addiction Blog Posts » This Is Why Addicts Can’t Stop

This Is Why Addicts Can’t Stop 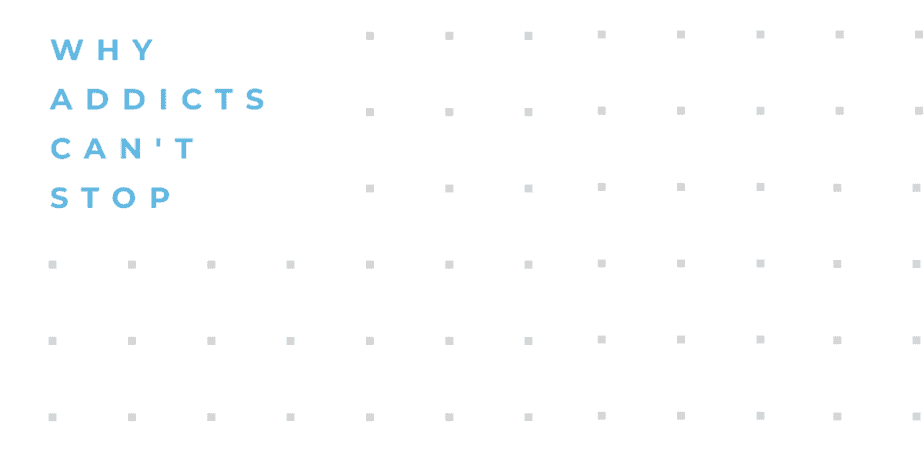 You’ll hear a lot of reasons why addicts can’t stop doing drugs and why alcoholics can’t stop drinking, but the main reason they can’t stop is because they literally cannot stop—their brains won’t allow it.

If they would, and they truly wanted to, I promise you that they could (some don’t want to stop, and that’s a different story).

We call addiction a disease for a reason: drugs and alcohol do something to my body that they don’t do to other people.

Once I start, that compulsion to keep going cannot be stopped. When I am forced to stop (I go to jail or rehab or run out), I cannot get the idea out of my head no matter what I do.

It means I walk out of rehabs wanting to stop, only to use that day. It means I cry while getting high because I don’t want to do it anymore, because I feel like a self-destructing robot with no free will. It means I’ll use anything to get high because I cannot stop thinking about it.

I’ve found myself walking into Staples to buy a can of air duster to suck down because I couldn’t get any alcohol or other drugs. It was disgusting, and I hated it, and I did it anyway.

That’s powerlessness. I’ve never felt more out of control than when I was using. It was like an out-of-body experience. I watched myself do these horrible things and couldn’t make it stop.

I would find myself dialing the numbers of drug dealers after changing my number and getting a new phone. I would find myself in liquor stores after I swore for the 100th time that I’d never drink again. I found myself buying coke despite the fact that I absolutely hated using it.

I was using against my will, and it was horrific. That’s why a true addict can’t stop using.

I know that it looks like the addict/alcoholic is doing this on purpose. After all, our hands are the ones lifting the bottles to our lips, putting the needles in our veins, putting the powders up our noses. But while it’s true my body is doing these things, for years I didn’t want to be doing it.

I wasn’t hurting my family and friends because I wanted to. I truly wished that I wasn’t doing those things. I just couldn’t defeat the obsession to drink and use. It was like nothing I’ve ever experienced.

So that answers the question of why addicts can’t stop using drugs, but there’s an important assumption being made here: we’re assuming the addict/alcoholic wants to stop.

If the Addict/Alcoholic Doesn’t Want to Stop, You Have a Different Problem

If you’re reading this, and you have a friend or family member who is an addict or an alcoholic who can’t stop, there are 2 important questions to ask:

The 1st question might not be clear. There are certainly people out there who use and drink a lot like I do but have the ability to stop or moderate on their own, and for whatever reason, they don’t exercise it.

For many people who use or drink heavily, they may just not want to stop.

They may never have tried to stop because they saw no reason to, especially if they weren’t have severe consequences (severe enough, in their opinion, to make them want to stop).

But they might also be like me and still not want to stop, which means they’re alcoholics/addicts and either don’t know it because they’ve never tried to stop or just don’t care if they are and wouldn’t stop anyway.

It could be because they can’t imagine how they could live without it. I’ve felt that before, especially in the early days of my disease.

It could be a ton of other reasons, but the reasons don’t really matter. If someone doesn’t want to stop, they’re not going to get sober no matter what you do, and it doesn’t really matter if they’re a true addict or not at that point.

That’s so different from other types of illnesses, even other mental illnesses.

If someone has cancer and doesn’t think they have cancer or refuses treatment, in theory you could hold them down or knock them out and force them to have the treatments, and the cancer would be cured (hopefully) no matter what that person thought.

It’s the same with many other types of mental illnesses. If you force a person with Bipolar Disorder to take the right medications, they’re going to have a reaction to those meds whether they like it or not and (hopefully) get better.

The same just can’t be said for alcoholics and drug addicts. If they truly believe that there’s no problem, why would they stop? There’s no medication you can force into them that will eliminate their desire (not an uncontrollable compulsion, but just a personal desire) to keep getting high.

Addicts Can Stop Using, But They Need Help

I used to think I would never get more than a couple days sober. I couldn’t quit no matter what I did.

I know a lot of people who have had the same experience.

I couldn’t stop because my brain had been changed. It craved drugs and alcohol at all times. The fact that this craving no longer exists in me is a miracle that I cannot explain. What makes it even stranger is that it basically happened overnight.

There are many paths to sobriety. The path I took was through the 12 steps, and it was so effective that I’ve never bothered to try another program.

That being said, if anyone finds a different path and stays sober and improve their lives and stop hurting themselves and others, that’s awesome. What works for me won’t work for everyone.

The true addict and alcoholic—the one who can’t stop no matter what they try on their own—can still find sobriety if they follow a program of action with the same rigorousness with which a burning man seeks water as long as it’s the right program for them.

It can be done.

For some addicts and alcoholics, Suboxone is a method of staying off hard drugs and drink. It doesn’t work for everyone though. Here’s my experience with Suboxone.

My son Kevin Lee (Levi) Harris died of a fentanyl overdose on 3 20 2020 in Merced, Ca, 15 days after his 19th birthday. He had gotten addicted to percocet/oxycodone/rockocet the previous summer, but we had not even known that he had until the day after he died. He was a high functioning addict and very secretive. We knew he had been using mj/thc, alcohol, and elavil and I was sure other drugs but I did not which ones. I should have asked him. That would have at least have given him the chance to tell me. I don’t know why he behaved as he did. He was obviously troubled and sociopathic and his mother was schizophrenic and had abused him as a baby and I had spanked and yelled and abandoned him and left him with my father. Still only about 800 people out of 40 million die of a fentanyl overdose in Ca in a given year. Another key point was that he had an od on percocet/oxy/roxy, lean, and elavil on 12 15 19 also at his gf’s house but was rescued, narcanned, and survived but never told us. He was certainly addicted by then as he kept on using until he took the fentanyl death pill and stopped breathing that Friday on March. He went down fast.

I’m so sorry for your loss. Thank you for sharing your story.

Addicts find other things to replace the missing part of their brain. For me the only time I was halfway normal was after a fast detox and put on naltrexone. It helped more than anything. But of course the doctor wanted me to stop it. The reason? Well it can damage your organs. The way our society thinks needs to change in order for any progress to be made. I finally found a replacement where I had no cravings and could function everyday. Yet was cut off and guess what. Few months later back on whatever. I’m not sure if it’s politics of the whole pharmaceutical world that’s preventing drugs like this to be distributed or what. I feel like a part of our brain is missing something. Whatever it is it needs to be filled.

Yeah, there’s definitely something profoundly broken in my head. For me, the thing that fills it is the 12 steps, but I also need to take a lot of pscyh meds in order to feel even reasonably normal.

Have you tried naltrexone. It is another medication however if you feel close to relapsing I highly suggest to get on it ASAP. It’ll completely stop the cravings and you’ll feel normal. Don’t need to be on it for long tho. Maybe look it up and see? It is a very hard medication to get a prescription to because apparently they rather let you relapse than help a lot of times.

I haven’t tried it, but I definitely would if I needed to. I’ve been sober for 9.5 years, so right now I feel pretty good about my sobriety.