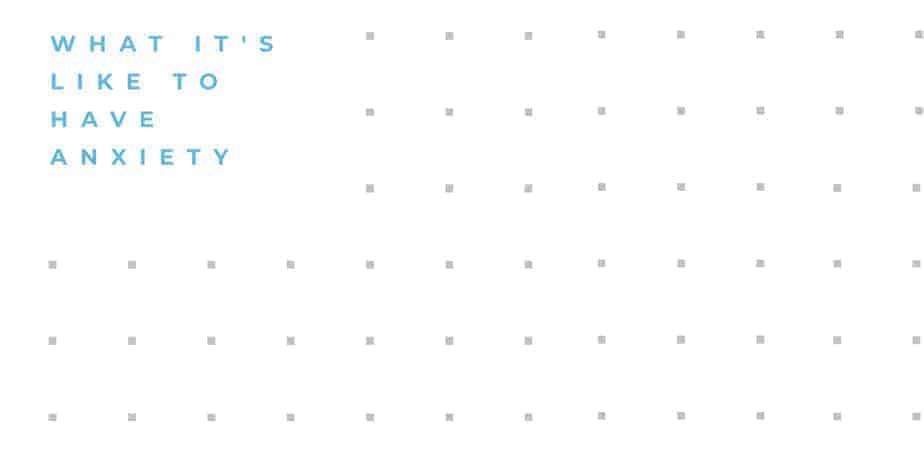 What it’s like to have anxiety is like having a rock on your chest. It’s like having your breath taken away in the worst way possible. It’s like this low-level, unplaceable fear that comes from nowhere and everywhere.

Anxiety is like fear, except it’s not. It’s this thing that eats you alive, that takes you out of the moment and places you in this strange future where you can’t place what it is that’s causing you to be so goddamn afraid, and yet you are—this future where something terrible is about to happen.

But that’s just generalized anxiety disorder—anxiety about something that you can’t place or name.

There are many other types of anxiety out there.

Let’s take a look at some of the different types.

I have pretty severe social anxiety, but I’ve found that it basically doesn’t exist when I’m around people I trust—friends, family, people I feel comfortable with. People I can be myself with.

Now that I think about it, having social anxiety is like having your throat close and your mind go blank when you normally don’t have that problem. It’s like I’m suddenly super aware of myself and everything I do or say. It’s like I feel like a total idiot and can’t get the words out of my mouth, like being perpetually afraid I’m going to say or do the wrong thing.

What it’s like having social anxiety is what it’s like to have anxiety in general—in certain situations, I just feel my heart pounding out of my chest, and I feel like I can’t look at anyone. A good example would be being in a room with people I don’t know who all know each other, like going to a networking mixer or going to an AA meeting that I’ve never been to before.

One of my biggest fears when it comes to social anxiety is speaking. This can mean public speaking, and even though I’m pretty good at speaking in public, especially giving speeches, it still terrifies me. My heart feels like it’s going to shatter my ribcage every time I get up on stage. It also means speaking in groups, or even speaking one-on-one with someone I don’t know.

It all comes down to feeling like I’m just not in a place that’s safe. I think that describes all kinds of anxiety—it’s like I’m under attack. It’s like my stupid-ass lizard brain is telling me there’s danger and that I have to get away, even though there’s no lion or tiger or bear to run away from.

I can only imagine what my anxiety would do in those cases.

To alleviate this anxiety, I have to do these little rituals—that’s one of the defining features of my OCD: constant checking.

There are other things I’m terrified of, like getting a disease. That means any time I’m near something that could give me a disease (dog poop, cat poop, raw chicken, raw meat in general) I feel like the disease is already on me, so I wash my hands over and over (and any part of my body that touched it, like my wrists and arms) until I’m absolutely certain I got it all, which is, of course, impossible because it’s impossible to see germs.

These little rituals give me temporary comfort and make me slightly less afraid of getting some sort of disease, but they aren’t permanent.

Anxiety is miserable, but thankfully, there’s help for anxiety. I’m a drug addict and was heavily addicted to Xanax and other benzodiazepines, which is unfortunate because that’s one of the medications that can help with anxiety, but there are other ways to cope.

There are other methods of dealing with anxiety, like cognitive behavioral therapy and exposure therapy for OCD. Ultimately, you have to find what works for you.

Do you have bad anxiety? I totally get it. Tell me about it in the comments—I want to hear your story.

Symptoms of Autism in Women | 10 to Watch Out for

While both men and women can have Autism, the symptoms of Autism in women can be profoundly different from those in men. Autism spectrum disorder…

Have you ever heard someone describe a person as “borderline?” They’re usually referring to borderline personality disorder Similar to how people say, “that’s depressing” or…