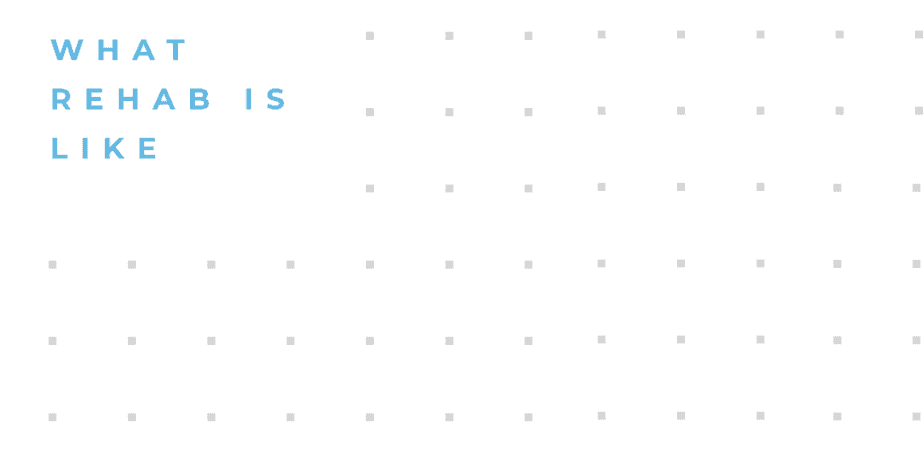 If you’re wondering what rehab is like, then let me just tell you my personal story about going to rehab.

I’ll never forget first time someone told me they’d been to a drug rehab.

I was still using, and I would continue to use for another couple years. I’d never even heard of Cocaine Anonymous or Alcoholics Anonymous before.

I had no idea what happened in rehab. I didn’t want to know. I just knew that people who went had something wrong with them.

I wanted to run away from this guy. I couldn’t figure out how messed up he must be to have gone to rehab. When he told me that, I felt so awkward. I just wanted to get away from the guy.

He couldn’t control himself. I still thought I could.

I was delusional (obviously).

When I finally made it to my first inpatient rehab a few years later, after detoxing off OxyContin in a detox facility, I found out that rehab isn’t anything like what I thought.

It was better than I thought.

And it was worse than I thought.

Rehab is absolutely like high school. I know that a lot of people who have never been to rehab are scared of going.

I was scared too.

I quickly learned that it wasn’t any scarier than going to high school was after finishing middle school.

Sure, at first you’re terrified (if you have any sense anyway).

Most rehabs have a cafeteria, complete with lunch ladies (and lunch gentlemen). Just like in high school, if you don’t know anyone, you feel awkward and don’t know where to sit.

And just like in high school, there’s usually someone cool who will invite you to sit with them.

Because everyone is coming off serious drugs, emotions are high (and so are the hormones). Sounds just like high school right?

Cliques form. People meet the loves of their lives (I know people who have gotten married 60 days after leaving rehab together). You make friends for life.

You thought I was joking, right? It’s exactly like high school—you even have classes that you have to take. You have to be in class on time every day.

You have teachers. You have homework. Most rehabs have a gym.

And these aren’t fancy rehabs I’m talking about—this is average.

The fancy ones have pools and horses and all kinds of crazy stuff that makes them even more awesome than what I’ve just described.

There’s actually so much to do in there that it’s hard to get bored. There are AA meetings you can go to. Some of them have church services. There’s usually free time to exercise or play board games.

I thought it was going to be a boring hell, and it wasn’t.

But just like in high school, there’s a lot of bad stuff happening too. There are the bad kids who don’t take anything seriously. There’s gossip and drama. Sometimes there are fights. Sometimes the counselors suck.

Sometimes you cry. Sometimes you just break down. A lot of people get on psych meds while in rehab and have to deal with the side effects.

A lot of people go into rehab after their lives have gotten bad on the outside. They’ve lost jobs (or might lose them). They’ve got legal charges pending.

When you add on top of all that the phsyical and mental stress of detoxing and the flood of hormones and neurotransmitters, people can break down or flip out at a moment’s notice.

That being said, just like high school, most of the time there’s a normality to things.

You make a friend (often your roommate if you’re in a rehab where you have a roommate). You guys stick together. Maybe you become part of a group.

You do your homework and smoke on your breaks and generally think about what you’re going to do when you get out. And that’s pretty much it.

Honestly, it’s more like a vacation than anything else. That can be dangerous for a lot of people—you can get comfortable in rehab.

You can forget how bad it was out there, forget the horrible circumstances that got you there in the first place.

That’s one of the reasons so many people relapse after they leave. They get complacent.

If you’re going to go to rehab, you have to fight against that complacency. You have to be serious.

Rehab Is for People Who Are Serious

I’m not going to tell you the name of the rehab I went to, but I can tell you that it was a place for people who were serious about getting better.

Anyone who wasn’t serious about getting sober could basically walk out of there at any time for any reason.

It also wasn’t exactly hard to get alcohol or dope and bring it into the rehab.

I never really understood that. If you wanted to get high, you could just leave.

That’s what some rehabs are like: they’re not restrictive at all.

If you’re truly serious about getting sober, going to a rehab like this might be great because it has the effect of weeding out the people who don’t really want to be there.

I wouldn’t recommend it though. It was hard to stay sober in there knowing that people were bringing in drugs (which they were).

There was a lot of temptation. I’m lucky I got through it without relapsing.

Other rehabs are significantly more restrictive. They recognize that many alcoholics and addicts just can’t stop using.

They lock the doors. They don’t let you have your phone. You can’t have your car there. There’s definitely no ATM available.

For many people, this can be great. It has a tendency to dampen some of the negatives that I listed in the previous section.

It’s harder for drama to start when there’s no phones for people to text each other on.

If you can’t leave the facility, you don’t have people bringing drugs in (mostly).

For many people, this is the right choice. I think it’s probably the right choice for most. If you could have stopped getting high or drinking on your own, you would have, right?

Of course you would. No one wants to go to rehab if they can avoid it, no matter how nice it is.

Going to a place that is going to remove temptation makes getting sober a lot easier.

Rehab Is for People Who Can’t Stop

Rehab is just a place where you go if you can’t stop drinking or getting high.

While there’s plenty of stuff going on around you when you’re there, you have to focus on why you came to rehab in the first place.

Subscribe
Login
0 Comments
Inline Feedbacks
View all comments
previousAre 12-Step Groups Cults? Are Groups Like PPG Toxic For Recovery? Maybe
nextIt’s Not That I Want to Die | It’s That I Don’t Want to Exist