8 Obvious Symptoms of Meth Use 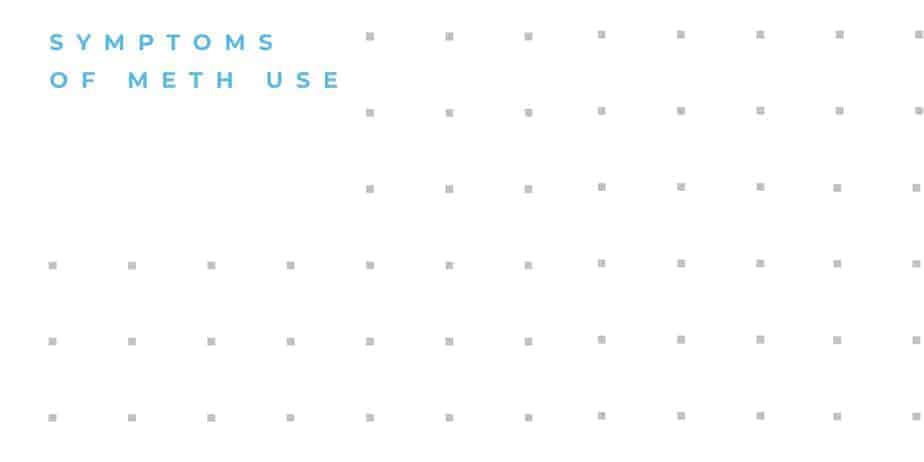 Knowing the symptoms of meth use might help you determine how to best approach someone you suspect might be afflicted with addiction.

One of the first steps you need to take when trying to help a loved one struggling with meth addiction is to understand what meth is and how it affects the user.

Having a working knowledge of how the symptoms of meth use manifest will help you determine how far along someone might be in their using.

What Is Methamphetamine and What Are the Symptoms of Meth Use?

Methamphetamine is classified as a stimulant, or “upper.” It is highly addictive and works by impacting the central nervous system to release large amounts of dopamine in the brain.

Dopamine plays a role in body movement and motivation and is responsible for reinforcing behavior that is satisfying.

Taking the drug releases dopamine rapidly in the brain, which in turn reinforces the behavior of taking the drug, thereby making it highly addictive.

How Methamphetamine Is Used

Meth is most commonly smoked, but can also be ingested orally or taken intravenously.

Because the meth high is associated with such a rapid release of dopamine, users tend to use it frequently, chasing the high through multiple uses a day.

Physical Symptoms of Meth Use

Most recovered users will attest that there are a multitude of symptoms that present themselves across almost every meth user. Some of these common symptoms include the following.

Meth is a stimulant that causes users to feel extremely energized and produces feelings of motivation to accomplish tasks.

This often leads to meth users taking things apart and rebuilding them or starting projects at odd hours of the day.

Due to the enormous amount of energy that users experience after taking a hit, they often have the “jitters” or slightly tremble. Some users develop more pronounced ticks that can crop up during normal conversation.

Paranoia is a common symptom of meth use as users become delusional due to lack of sleep and a decrease in cognitive function. Users experiencing paranoia often have visual and auditory hallucinations.

4. Open sores on the skin are one of the symptoms of meth use

Probably one of the most noticeable symptoms is the open sores that commonly develop on meth users’ skin and face.

These are created when the user begins to pick or scratch at their skin, usually as a result of coming down off the high and/or the paranoid delusions that can develop.

More commonly referred to as “meth-mouth,” users who smoke the drug are often afflicted with serious oral degradation. The drug produces toxic smoke that destroys teeth enamel and gum tissue and can even lead to bone loss in the jaw.

Usually associated with coming down or not being able to attain the drug, meth users can exhibit signs of extreme irritability as their central nervous system reacts to the sudden loss of extreme dopamine releases.

All users of meth tend to sleep infrequently as a result of the stimulant. It makes it hard to fall asleep and can even create insomnia in some users as their brains work in overdrive, causing users to stay up for days or even weeks at a time.

Users often develop powerful libidos as a result of the dopamine release when high. This can lead to an increase in risky sexual behavior and heightens the risk of contracting a sexually transmitted disease (STD).

Notice the Symptoms of Meth Use in a Friend or Family Member? Here’s How to Help

Meth users might present some of the most challenging cases in the recovery field. Oftentimes, users require physical separation from the drug, 12-step programs, and medical/psychiatric attention.

It is important to understand that drug use is a symptom of a larger underlying problem and therefore cannot be fully addressed till the underlying issue is addressed.

If you or someone you know is struggling with meth addiction or mental health check out MentalHealth.gov for resources.

Mike is a motorsport enthusiast and has owned a wide variety of sport and luxury cars. He attended the Porsche Performance Driving School at Barber Motorsport Park in Alabama and also enjoys motorcycle riding and racing.