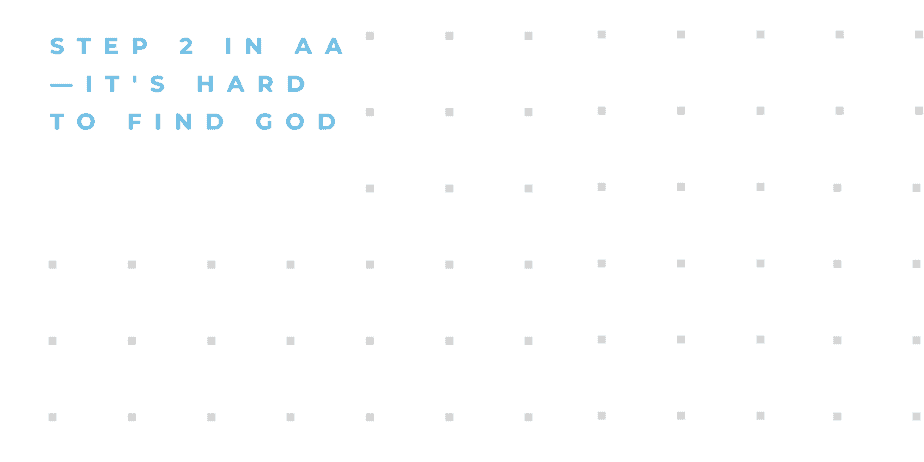 Step 1 is the hardest step.

But step 2 of AA can be just as difficult.

It’s a deceptive step. Many people think that they have it the moment they walk in the door because they believe in a higher power–some god from their religion. I think that’s why step 2 in AA is so hard.

But not everyone is able to have this experience of being certain of their higher power from day 1. Not everyone comes through the doors with a god in their heart and the ability to move forward to step 3.

It’s hard to make a decision to turn your will and your life over to the care of a power greater than yourself when you don’t even know what that power is.

I’ve seen more than a few men go back to drinking and getting high because they couldn’t get step 2. They couldn’t come to believe in something greater than themselves.

You’ll see a lot of opinions flying around the rooms about how step 2 works and what higher power means.

Let’s look at some examples.

Your Higher Power as Chair and Doorknob

I’ve always found this idea to be ridiculous. People say that, “well, I don’t believe in a higher power.”

So someone says, “Okay, well just make that chair over there your higher power. Or how about that doorknob.”

How we made our way from something greater than yourself to a dang chair is beyond me. I feel like it’s someone trying to help, but I’m 99% sure that telling someone who is basically atheist that a chair can be their higher power is just going to make them feel like this program is stupid as shit.

Your Higher Power as the AA Group (GOD=Group of Drunks)

This one is a lot better because it has some sense. It all comes down to how we define “a power greater than ourselves.”

Most people are going to immediately think of this as a god, and that god will probably be associated with a religion, but there are many things that are powers greater than ourselves.

For example, the sun is a power greater than ourselves. If something happened to the sun (for example, it disappeared suddenly), there would be shit all we could do about it.

We would all just freeze to death and starve to death—not sure which would happen first. The point is that there would be nothing that anyone could do about it.

Drugs and alcohol are powers greater than the alcoholic and drug addict.

It stands to reason that a group of drunks who are miraculously sober are a power greater than you.

It may not be perfect, but it’s damn sure better than a goddamn doorknob.

This is where I’m at. I’ve been sober for years, and my definition of my higher power hasn’t changed.

I know that there is something. I know that when I work the 12 steps, that power keeps me sober for reasons that are unknown.

I know that it’s essential quality is mysteriousness.

I know that whatever this power is, it Sure Ain’t Me.

I wish I could take credit for that because it’s an awesome little saying, but I heard that in a meeting, and I’ve loved it from that moment on.

When I came into AA for the second time after a long, hard relapse, step 2 wasn’t a problem for me because I’d gotten my ass kicked so bad.

I was willing to believe in anything. Anything that made the pain stop.

What If None of These Work for You?

I’ve heard of people making their parent’s or people who have passed away their higher power. If that works, go for it.

Step 2 isn’t something you have to have down 100% before you can move on.

For me, I believed that there was something and that it would work if I did the 12 steps.

For step 3, all I was doing was devoting myself to the 12 steps. In the beginning, you could say that the 12 steps were my higher power. That was step 2 for me, and it worked exceedingly well.

Don’t overthink this one. Keep moving forward in the 12 steps and see what happens. See if you come to believe in some power that is greater than yourself.

The best argument for the effectiveness of the 12 steps is the millions of alcoholics and addicts who have been able to achieve sobriety by working them.

If that can’t convince you, then you might be fucked.

Remember, no one said this power had to be a god.

The sun isn’t a god.

A group of drunks isn’t a god.

You can be an atheist and work the 12 steps.

In AA, Step 2 Is an Ongoing Process

If you keep going and don’t give up, I promise that your conception of a higher power isn’t going to mean much.

My conception is practically nonexistent, but it works.

Give it a shot.

You have nothing to lose.

I haven’t heard the doornob one in a while, I was told that almost 20 years ago when I entered AA after rehab. My father & other men (big eye roll) have also been it, but of course they failed my expectations. Today I just know there is something to praying & knowing there is a power greater than me.

Yeah I heard the doorknob one just the other day. I agree with you—I don’t need to know much about my higher power to know that it’s there.

Read More »What Does Detox Feel Like? Spoiler Alert | It’s Not Fun

Is Ambien Addictive? Definitely | I Was Snorting Ambien

Is Ambien addictive? My experience is that it is — I even started snorting Ambien. Ambien is habit forming as far as I can tell.…

Read More »Is Ambien Addictive? Definitely | I Was Snorting Ambien

Addiction Recovery | Is It Possible to Recover From Addiction?

Is addiction recovery possible? Can you truly recover from addiction? The answer is yes — you can recover. What Addiction Recovery Means in Practice Addiction…

This website uses cookies to improve your experience while you navigate through the website. Out of these cookies, the cookies that are categorized as necessary are stored on your browser as they are essential for the working of basic functionalities of the website. We also use third-party cookies that help us analyze and understand how you use this website. These cookies will be stored in your browser only with your consent. You also have the option to opt-out of these cookies. But opting out of some of these cookies may have an effect on your browsing experience.
Necessary Always Enabled
Necessary cookies are absolutely essential for the website to function properly. This category only includes cookies that ensures basic functionalities and security features of the website. These cookies do not store any personal information.
Non-necessary
Any cookies that may not be particularly necessary for the website to function and is used specifically to collect user personal data via analytics, ads, other embedded contents are termed as non-necessary cookies. It is mandatory to procure user consent prior to running these cookies on your website.
SAVE & ACCEPT
wpDiscuz
2
0
Would love your thoughts, please comment.x
()
x
| Reply