Step 1 AA | Can It Be Done Perfectly? 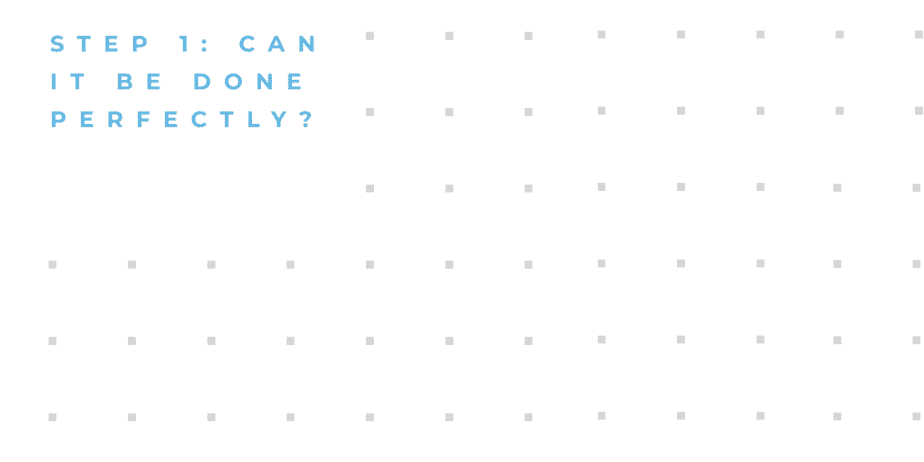 Step 1 AA: “We admitted we were powerless over alcohol (and drugs)—that our lives had become unmanageable.”

I’m sure we’ve all heard this in meetings before:

“Step 1 is the only step you have to do perfectly.”

I always wondered what the hell that meant.

How can a step be done perfectly? What does that even mean? Does it mean I admit that I’m powerless really hard?

I think what people are getting at here is not so much the idea of admission as the idea of a complete understanding that they can never use again, coupled with the fact that they are terrified of using again.

I don’t think you have to be terrified of using again to be able to admit that you’re powerless or that your life is unmanageable.

When I first came into the program, it took a few months, but I soon became crystal clear on the idea that I was powerless and that my life had become unmanageable.

And yet, when I would stumble in the program or relapse, or more often, when someone else relapsed, I would hear people say, “Well, they’ve got a step 1 problem.”

Did I have a step 1 problem?

But there’s this odd extrapolation that people in the program make. Basically they say that, if you’ve got a problem with any of the other steps, then you haven’t gotten your ass kicked enough by drugs and alcohol to convince you all the other steps are necessary, so you didn’t really get step one or you would have just surrendered to all the other steps…

Which sounds really stupid when you say it out loud because step 1 is just an admission that yeah, I’m a drug addict and alcoholic, and yeah, I can’t manage my life because of it.

You’ve Got a Step 1 Problem Kid

I know more than a few guys who have a step 2 problem. They can’t bring themselves to believe in a higher power. No matter what we talk about, no matter the different options we go over, no matter the spiritual and nonspiritual solutions to this problem I offer, they just can’t believe in something bigger than themselves.

I urge them to throw religions and gods out the window and think only of powers that are greater than them, to say they don’t need to worship this diety or that power, that they can just have a core belief and move on from there.

Do these people have a step 1 problem? Is that what’s really going on here?

I don’t think so at all.

I think we should take this at face value—they have a problem with step 2. They don’t believe in a higher power, and it doesn’t matter how many times they get beat down by alcohol and drugs, they’re not going to start believing in something they don’t believe in.

Think of torture. If I torture a guy enough, he’ll say anything I want him to say. He’ll say he believes in god if I ask him.

But does that mean he actually believes?

Alcohol and drugs give us severe beatings. They torture us to death and back. For some people, this is enough to change their mind.

But not for everyone. Some people are just tired of the pain and will say whatever they have to say to make it stop.

If you’re being tortured, and you’re told to say that the United States of America is the worst country in the world, you might say it, but that doesn’t mean you believe it.

I think what’s really going on here is more of a misunderstanding of how the disease works than anything else.

Step 1 of AA Is About Admission, but the Disease Warps My Mind and Takes that Admission Away

One of the most obvious symptoms of drug addiciton and alcoholism is when someone doesn’t think they have the disease.

That’s what it does when I’m not working a program. It tells me that hey, bud, everything is okay. We just made a mistake last time. We can make this happen. It’s been 9 years after all. Can’t you just have one drink?

How about a pill?

If I let this kind of bullshit go on long enough without working a program, I’ll find myself believing those lies.

That’s how this stuff works. Without a barrier between me and the disease, I start to think I can handle it again.

I admit that eventually this can go away, but I’ve seen that pretty rarely. What I see more often is that people who are totally clear on step 1 when they’re sober are trying desperately to control it when they’re using and drinking.

Why? Why not just go all out?

Yet I did the same thing on my last relapse.

I promise you that I was clear on step 1.

I think it’s dangerous to tell people that they have a step 1 problem when they actually have a problem with 12 or 7 or 9.

First of all, it will confuse the shit out of someone who’s new to this thing.

They’re going to start second guessing themselves and wondering if they actually do understand what it means to be powerless… when they already crossed that bridge.

So now you’ve got people who were making progress taking a step backwards.

Second, you take the focus off the problem at hand, the obvious problem—the step they stumbled over.

It’s one of those “opinions kill people in AA” kind of things.

Step 1 is simple. If you admit that you’re powerless and that it makes your life unmanageable, you’ve got step 1.

If you keep relapsing, maybe other steps are the problem.

Or you know what? Maybe there’s another way for you to get sober that isn’t AA. There are a lot of avenues to sobriety these days, and not all of them include entire abstinence.

Find what works best for you.

And don’t let anyone take your step 1 away from you.

D8 — A Comprehensive Guide to Delta-8-THC

D8, also known as Delta-8-THC, is a derivative of the hemp plant that has similar effects to the active ingredient in marijuana — THC. And yes,…

According to the experts, spiritual fulfillment always has to do with a poorly defined definition of what the spirit is — namely, that it’s something…