My Story “Shackles” Was Published Today in Factor Four Magazine 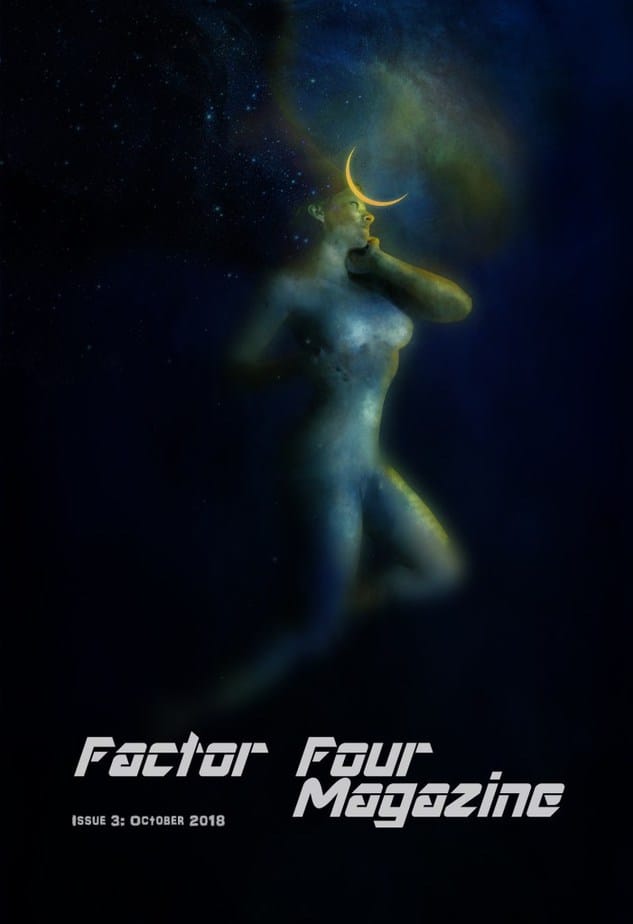 Factor Four Magazine is a new publication that publishes flash science fiction, fantasy, and other genres.

With those ideas in mind, I ask this question:

Stepping from a spherical white craft that rests at the top of a gentle hill, the being that looks so achingly human points with fingers the color of earth. The pink light of the closest dozen suns reflects off each nail, skin the color of fresh pine needles absorbing sunshine from stars like gemstones in the sky—emerald, sapphire, ruby, amethyst, morganite. It stares across the undulating sea of grass with eyes like the ocean, brushes back jade hair the wind has whipped into its mouthless face. The sky is blue, and the grass is tall, and the wind whispers with life, and the being points.

The being’s companion climbs from the craft, waves a seven-fingered hand, watches the vehicle dissolve from vision, turns to its companion, follows the pointing finger with eyes like stars, gazes for a moment, nods. It, too, is an amalgamation of forest and earth, hair the color of fresh soil hanging to its knees, shades of green weaving together on flesh covered by garments that fade in and out of reality, blinking in slow patterns, bursting with energy.

Where the first being has pointed, two massive trees grow on a hill, trees thousands of meters tall, dozens wide, trees like starships, obelisks of life thriving in a sun-filled land, ancient bastions standing against the horrors of infinity. The being lays a hand upon its companions skin, and wordless understanding flows from one mind to the next. The companion turns, and they lock eyes, and ancestors carried for ten thousand years in strands of molecular memory scream from DNA prisons, but their screams are word-filled, and these beings that carry within them the vestiges of a species tortured by language, an old species aching with the corruption of word and thought, these voiceless beings wonder at the cacophony that rises within, and from it flows no understanding, and so the shrieks are ignored, and they turn eyes like frozen seas to the great trees, and they walk.

Each step propels the pair a meter into the crisp air, where they hang for almost a full second before settling like a feather to the lush grass. The suns glisten overhead, and three moons that swallow half the sky dash from horizon to horizon in the time it takes the two to reach the trees.

A hundred meters from the massive trunks, the two hold hands, gazing up at the colossal, duplicate crowns of foliage above, their eyes untroubled by the cacophony of light. A breeze blows, and despite the incredible mass of suns in the sky above, the wind is cool, and the grass thrives. They stare at leaves so far from the soil on which they stand that assuredly they must flutter in vacuum, leaves they could use as sails were this place to have a sea, and they wonder, wordless, at the twin titans.

There is quiet for a moment, and then an ocean of color and light shimmers over the trees. The breeze dances around them as they stand, unmoving, minute after minute, ancestral fury groaning at the wordless intention murmuring in the pair’s blood.

After a while, a song begins to rise. Singing creatures crawl from crevices scattered across the gargantuan trees, trees with roots that delve to the heart of this tiny moon, primeval trees that knew ancientness before our world was born. The creatures are echoes of a clinging past, a fusion of type and shape and form, unions of separate things joining for something greater, something more elegant: Fur-covered rodents with leaves where ears should be, eyes like agates; insects formed of rainbow and stardust and curling vine; feathered things with voices like the ringing of golden bells and feet like black roots; hanging beasts with green tendrils for tongues, tails of soft fur, flashing scales of oiled bark.

The song of the creatures is a lullaby of eternity, a requiem of the infinite, and the melody surrounds the companions and fills them with spirit and essence, and they yearn to dive into the river of time and inevitability, into the flow of fate and being that has drawn them inexorably to this world, this fragile moon so close to the black, ravenous jaws that ache to swallow all light and leave green things in darkness.

As in a dream, the song swirls around them, and the tones are made manifest on wind that is itself filled with the life of this place, and a figure forms from light and wind, a body of thin glass and starlight, a thousand sparks racing up and down its alien outlines, and the crystalline being gestures with limbs of three to apertures that have appeared in the heart of each tree, and the companions ignore the cries of despair that boil up from the legions within their blood, and their clothes blink into nothingness, and each walks, separately, to a hole in one of the trees, and the cavities swallow them with greed.

The song changes now, alters, deepens and widens, the pulsing of stone hearts, the beating of primal drums in the roots of mountains, and the creatures dash for closing holes all across the trees, and an iridescence rises from the thick, brown bark, a glow that pierces the wind-creature of glass, that shatters its thin existence and outshines the tens of thousands of suns concentrated in the heart of the galaxy, here, around this minuscule moon.

A rumbling begins now, and deep in the trees, the green beings lay each in cocoons of silk and branch and radiance, and the creatures surround them, crooning their primordial, sorrowful song, and the song vibrates throughout the inside of the trees, dancing upon walls of moss and bark and brilliance, walls of green things and twinkling things and dark things, and the superfluous bodies of the two, the shackles that tie them to this plane, are suddenly shot through with a radiant, golden light, and their veins and arteries sparkle and blaze behind green skin turned clear, and the light flows like a wave throughout the dusk inside the tree, and moss and bark and all the creatures of space-anchored matter and time-fettered reality shine with a radiance holy and horrid and endless.

The light fills the hearts of the trees to bursting, and with a flash, the trees surge and disintegrate and explode, and tiny bolts of energy fly from them, dance between the close-packed stars, glide across the mouths of the ravenous ones, fracture into a billion pieces as they skate across death and come out the other side, fly with the song still echoing in their hearts, fly into the black abyss that surrounds this place of fathomless dark and eternal brilliance, fly and disappear into the night.

And somewhere unreachable, in the little curled places hiding in the breaths of atoms, the companions wake, and they reach with arms the length of universes, and they grasp each other with hands like galaxies, and a joy fills hearts made of black holes and suns, for they are free now from the icy death that shadowed their bodily forms, free of the tyranny of time, and they whirl and spin like bubbles in an endless sea, and they burst from the skin of reality into a deeper existence, and they pass from the place where story and knowledge can follow, pass into the quiet places of the dark.

This story was originally published in Factor Four Magazine.

previousMy True-Life Recovery Story — What Addiction Is Really Like
nextA Story of Uselessness | Living, as They Do, at the Bottom of the Sea

My Flash Fiction Story of 1000 Words “Breathe” Was Published Today

My flash fiction story of 1000 words “Breathe” was published today. “Breathe” is one of those stories that just poured out of me. I sent…

I’m pretty proud of this podcast story. A lot of work went into this short story. “Gravity Pulls Down” is about an addict addicted to…