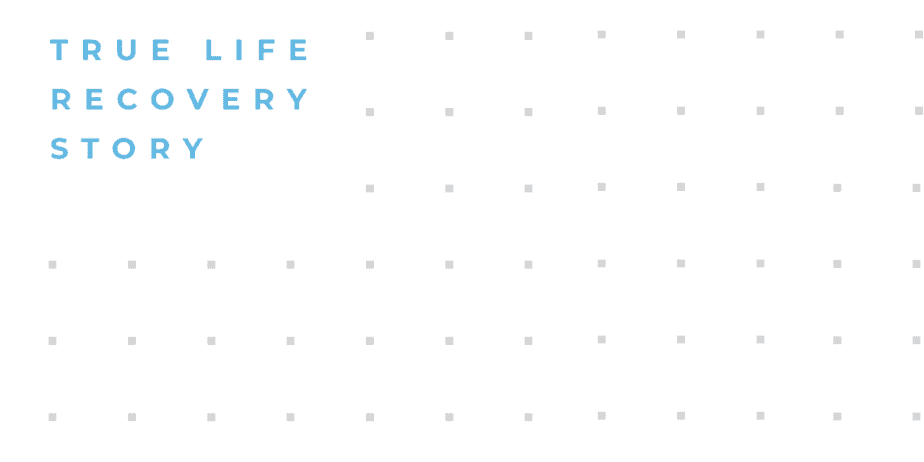 On June 19th, 2018, I was able to tell my true-life recovery story on stage at the Moody Performance Hall thanks to an incredible opportunity from Oral Fixation and with the shrewd guidance of Nicole Stewart as my editor.

The entire show, which featured many other performers in addition to myself, was based around a simple phrase, “All Over the Map,” which I felt was perfectly descriptive of what addiction is like.

You can watch my full performance here, and below, you can read the entire script, which I wrote and Nicole Stewart edited. If you’d like to watch the entire show, simply start the video over.

Thanks for watching, and feel free to share your recovery story in the comments.

It’s April 2008. I’m waking up dope sick at eight p.m. in the apartment my parents pay for.

They continue to support me because they believe the lie, the mask, that I’m a normal 24-year-old kid working hard in my seventh year at the University of Kansas.

They believe I’ve never done much beyond smoke the occasional joint. There’s no way I could be a drug addict.

I’ve slept through Kansas smashing Memphis in the college basketball game of a lifetime. My mom is down in Texas frantically calling me.

She’s not calling me because she thinks I’ve overdosed again or because she’s worried I’ve killed someone in yet another drunk driving incident. Despite the very real possibility of those things, I’ve managed to hide the overdoses and explain away the DUIs.

She’s calling me because we have a ritual of watching the game together. For her, it means connecting with her son.

For me, it’s a method of adding a layer to the mask that convinces her I’m healthy, hardy, and certainly not on hard drugs, that it’s totally fine to keep sending me eighteen hundred dollars a month for rent and food.

That’s a very specific number, because that’s exactly how much money Jeff, the sixty-five-year-old psychopath with a gun fetish, charges me each month for OxyContin and Valium.

Awake and dope sick, my body feels like it’s disintegrating. I’ve run out of drugs. The terror of potentially not getting what I need to get well crushes my guts. Kansas is celebrating a National Championship win, but I can’t care, because I have to get dope while I can still walk.

I wish I wasn’t like this. I wish I could be a part of life, a part of the community, a normal kid celebrating the game.

In a rare turn of luck, I find loose pills in my pocket, which means I can be sane for eight hours. I can go to Mass street and pretend to be normal.

But when I get there, surrounded by thousands of celebrating fans, I feel utterly isolated. They are not like me… and I will never be like them.

My mom is calling to see if I watched the highlights. I should answer if I want the cash to keep flowing, but concerns of keeping up the mask fade as I realize a perennial drug-addict truth: I need more, and soon.

Fortunately, I have options—I’m a small-time drug dealer. And though Jeff is the logical choice, I’m high. When I get high, I am filled with rage.

I think of how this old man manipulates me, a 20-year-old kid with a severe drug problem, and I think “Screw Jeff—I should go to Wichita and buy a bunch of coke instead.”

Or should I? Should I go to Wichita and meet up with New York, the 40-year-old felon loaded up with pounds of blow between prison sentences? Or should I go to Kansas City and hit up MT, the 400-pound pill dealer with sleep apnea? Should I go to the trailer park after all and meet Jeff and hope he doesn’t put a rifle to my skull? Should I go to Topeka and hit up the 75-year-old psychiatrist with bottles of Oxy, a lazy eye, and a limp from all her strokes? Should I just go to Texas and confess everything?

And in the midst of this madness, the monstrous thought I try so hard to suppress crawls to the surface—there’s only one place I truly want to go, and it’s six feet under ground.

In twenty-four years of life, I’ve fantasized about dying for thirteen, and today, in a crowd of thousands of joyful people, I have a vicious moment of clarity: The drugs are—inevitably, inexorably, and every damn time—not enough.

And they’ll never be enough.

I call my addict girlfriend to help me collect the components of my suicide toolkit. As night burns into morning, we drive all over the damn map. We drive to Kansas City and pick up a bottle of OxyContin.

We snort a handful before we drive to Jeff’s trailer park with my rent money, where I buy Oxy, Valium, and a pistol. She must know what I’m planning, but she gets free pills if she stays quiet, and so she does. We go to Richie’s place, and he hooks up Adderall and coke and heroin.

We go back home, and she won’t leave, and my roommates won’t shut up, and I think right at the temple is the best way to do it, but I gotta be good and high first.

But she won’t leave, and we burn through all the dope in a few days, and then she leaves, and I’ve lost my nerve, and the horror of the situation hits me: I have to go back out there and get more dope, and I no longer think it’s physically possible to put enough in my body to feel OK.

But that’s a problem for tomorrow. I wake to a knock at 9am. Shirtless and sober, I open the door, and suddenly I’m on the floor with a gun to my head.

It’s a raid—the Kansas Bureau of Investigation has finally come calling, but they screwed up. Had they come earlier, they would have found my little smorgasbord. As it was, they found a few pills and a little weed. They take my drugs, they take my money, and they say, “Don’t call us—we’ll call you.”

My money is gone, my drugs are gone, and I’m magically unarrested, which is somehow worse because I have no clue when the ball is going to drop.

I’m still carless and jobless, my junkie girlfriend has had enough, I’m a complete failure, even at suicide, and my mind is racing, trying desperately to find a way out of this catastrophe.

And that part finally sees a chance.

It speaks. It tells me what I so desperately want and hate to hear:

“We don’t have to do this anymore. Ask for help. It will hurt less than this.”

I call my parents and confess. My dad shows up eight hours later. The mask is shattered now.

He sees the truth of what I’ve become, and he’s come to rescue me, and somewhere on a highway in Oklahoma, I take the first deep breath I’ve had in a long time.

But it doesn’t last. Outpatient treatment fails, and my relapse reinforces a cruel truth—I am utterly unable to stay sober on my own. A year later, I walk into a rehab.

Three days in, and all I can think about is getting high. I’m plotting my escape, and I’m changing my mind, and suddenly, this guy walks onto the stage of my rehab’s lecture hall. He says he’s like us, but he found a way out. He says I’m completely screwed: My disease is implacable, incurable, and deadly.

And he walks away.

And something in me breaks—the addiction, so absolutely powerful, has been momentarily crushed. The piece of me that never gave up sees its chance. It shrieks at me in desperation:

And I listen—because after all the darkness, I finally want to live.

I chase him down. He tells me that I can recover. And I believe him. And for the first time in my life, I see a wide path, and all I have to do, is follow this man’s map.

If You Liked My Recovery Story, Read My Fiction About Addiction

If you enjoyed my recovery story, check out some of my fiction that explores what addiction is really like.

Wow. What a powerful speech. Listening to that makes me happy I found sobriety.
It also makes me happy to say I don’t think I could have done it without you. It makes me happy I have you in my life.
It still amazes me the road you have traveled in such a short time. The hurdles you have overcome. What amazes me more than anything is the person you have become. Your talent to share your story and moreover, the ability to change people’s lives. God gave you a last chance and you have run with it. He must be very, very pleased.
Thanks for sharing your speech, it was moving.

Thank you Claude! I truly appreciate your friendship and your kind words, and I’m glad I met you too. You’ve come a long way in a short amount of time too, and I’m sure you’ll be making an impact in people’s lives as well. Keep on trucking my friend!

Such powerful speech. It makes me more proud than ever to know you. Keep doing what you’re doing. It makes a difference.

Thank you Dr. Jackson! I really appreciate you saying that 🙂

That felt almost like reading a story about myself except mine just kept going. I’ll try to email you everything but truly thank you for posting this. I don’t feel as alone

I’m glad you’re getting so much out of all this. I look forward to reading your story! You never have to be alone again—there’s a whole community of us who are here to help.