My Story “Correction” Was Published in Factor Four Magazine 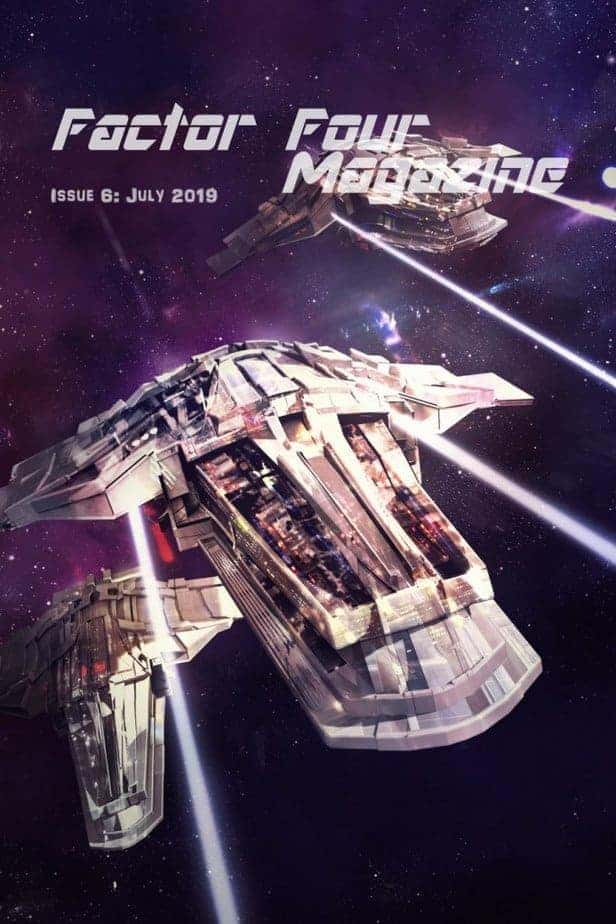 Factor Four Magazine has been super supportive of my writing and is an incredible venue. I’m disappointed that it had to close down but hopeful it may be revived someday.

While quite short, this story traces the current trends in incarceration in the United States to their logical conclusion, particularly condemning the attitude promoting/fetishizing punishment (and not rehabilitation) that is prevalent in our country.

The officer, covered in armor like angled obsidian, throws Sithas into the bare room, then speaks, its words guttural, static-filled:

“You will not be taken into the prison until you read and follow the instructions.”

Sithas, sprawled on his back, says nothing, watches the officer leave. He cannot remember the officer’s name, or his trip to this planet, or the ship, or… or anything before. He speaks into the empty room.

He shakes his head, grits his teeth, his words slipping away. He has a face like a shovel, hair like broken straw, his body withered, a white jumpsuit his only clothing. He gets off the floor, walks to the wobbly desk of aluminum on which a screen is perched, sits in an ancient chair. The light of a single magenta sun shines weak through the sealed windows at his back. Wind whips a light snow against the frozen glass. He stares at the dark screen. It brightens, and green words flow across it:

“Vic… vic… victim?” Sithas says. He shakes his head. His words crumble to dust. The next instruction scrolls:

“Take off your clothes.”

He does so, his body reacting though the instruction has already faded from his mind. More instructions scroll across the screen as Sithas grinds his teeth, holds his head in his hands, begins to tear at his thin hair. Words ache in his throat, fragmenting as they spill from his ruined mouth:

And his jaw spasms, his teeth clacking together so hard one incisor cracks. He has forgotten the question he tried so hard to ask. In the silence, his eyes focus and unfocus on the screen, and for a moment, he sees hidden words within the instructions, single letters standing out like brilliant emeralds embedded in the sentences of darker jade, forming a message. He peers closer, trying, with his empty mind, to unlock the meaning of the bright letters:

The prison is a lie.

He shakes his head, places one trembling, bony hand in the other, tries to focus, to read more instructions:

“You both took not just a life, but a mind. Therefore, you will have no thoughts during the sentence. Swallow this pill.”

A slot on the table opens. Inside is a pill like a blot of ink. Sithas stares at it, looks back to the screen. More instructions scroll, and again, individual letters stand out, blazing white now against the words that contain them. Sithas squints, forcing them into a sentence.

We are trapped in here.

He grunts, shuts his eyes, his face contorted. He tries with twisted hands to crush his own skull and make it stop, but weak are his arms, and weaker his will. The secret words are no longer whisper but roar, barreling down the corridors of his crumbling mind:

His teeth begin to chatter, his fingertips becoming cold. He eats the pill, and the pain stops. He begins to mumble.

And his mouth stops, frozen open, jaw slack, as thought and word seep from him. More instructions on the screen, his eyes drawn like magnets:

And he looks away, and wordless shrieks seep from his mouth, and he looks again at the screen, the bright letters flashing now, crimson and urgent, a warning from previous occupants of this awful room.

They burned our bodies.

They locked our minds in machines.

They torture us here, every moment infinite pain.

And his sight fades to black, and his shrieks become moans become whimpers become silence. He puts thin little hands against a thin little head, the pain of the words reverberating in a skull fragile as glass. He rocks back and forth, the chair creaking. A panel opens on the side of his screen. A tiny spider of metal and glass scuttles out, pinpoint feet tinkling across the desk. He does not feel it crawl up his arm, onto his bare chest. He does not feel the cable that extrudes from the spider pierce his heart, burrow through his body to his brain.

As he slumps across the desk, his mind flies into the body of the spider. The cybernetic officer enters the room, takes the spider in one spiked glove, pushes the lifeless body of Sithas to the floor, and waves a complicated pattern in the air. The pattern resolves into a web of floating holographic symbols, shining silver and gold. The spider leaps from the officer’s glove into the midst of the symbols, explodes in crimson radiance, disappears, and as the symbols fade, the officer stares at the body of Sithas for a moment, lifts its mask, spits carefully on the dead man, and mutters:

The officer grabs Sithas’ body by its feet, drags it through the door.

When the officer returns, it is carrying a thin woman with skin like grass. It sits her in the chair. She stares up with wide eyes, black pupils, hair like shattered fire crackling around her head. Her lips dry and caked with blood, she stutters:

She trails off. The officer’s words are brief:

The officer leaves. Corant stares at the screen. It brightens. Words appear:

“The prisoner will wear no clothes during the sentence. The prisoner—”

And within the words, a hidden message, glowing bright.

This was originally published in Factor Four Magazine.

My Flash Fiction Story of 1000 Words “Breathe” Was Published Today

My flash fiction story of 1000 words “Breathe” was published today. “Breathe” is one of those stories that just poured out of me. I sent…

I’m pretty proud of this podcast story. A lot of work went into this short story. “Gravity Pulls Down” is about an addict addicted to…