Meditation Course | Week 1 of Getting Back Into Meditation 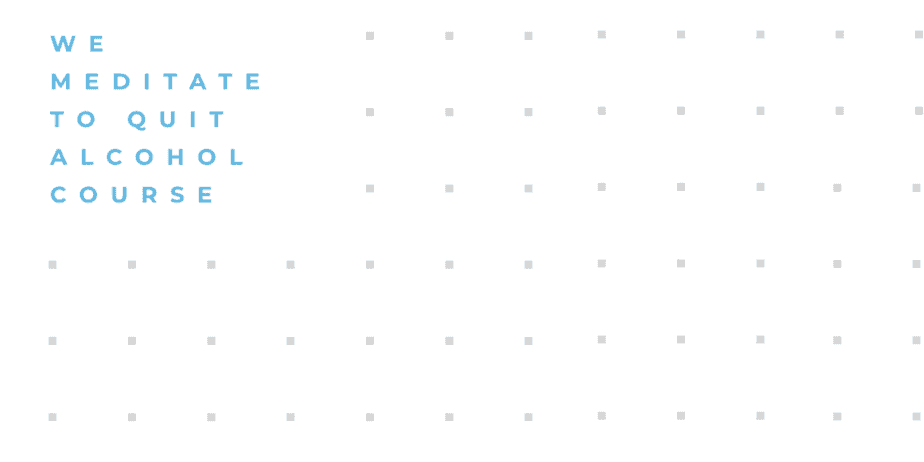 Second only to step 10, meditation has long been the bane of my program, and though I’ve thought for a long time that I should try a meditation course, I kept putting it off and putting it off.

The reason I thought I should try a course is that I’ve never really been able to meditate on my own. I’ve tried just getting quiet and letting the thoughts go on my own, but that generally fails.

I’ve tried doing guided meditations on YouTube. Those tend to fail me for 2 reasons.

So I sort of gave up on meditation. It was going to be perpetually put off.

Nine years later, I finally stopped putting it off.

I got an email from a meditation teacher named Rory Kinsella who asked me if I wanted to try his 4-week meditation course for free in exchange for an honest review.

I thought sure, why not, what do I have to lose? My meditation is nonexistent, so why not give it a shot?

What really intrigued me about the course is that it’s made for people who have problems with alcohol (it’s called We Meditate to Quit Alcohol).

Now I haven’t had a drink in 9+ years, so I’m not exactly the target audience, but I’ve always been of the opinion that harm reduction is a good thing. Not everyone is an alcoholic like me. Not everyone uses drugs to the excesses that I do.

Not everyone needs the 12 steps. They’ve always been a solution for people who are totally screwed and can’t stop drinking no matter what.

That being said, I know a lot of people who used to be in the program, usually for drugs, who then went on to be drinkers, and usually they end up drinking too much but not drinking alcoholically (at least the people I know personally).

So far, I can say that the course is for sure targeted to people who are heavy drinkers, but after the first week of the meditation course, I’ve found that it’s great for people with some sobriety under their belt too.

Week 1 of the Meditation Course–Forced of Habit

I think the biggest barrier to any habit is forming it in the first place. It’s always been that way for me.

Early in my sobriety, I had a lot of people around me who pushed me to develop healthy habits in sobriety, especially that of carrying the message and sponsoring people.

But I never got in the habit of meditating.

What I like about We Meditate to Quit Alcohol is that it’s simple:

I love that I don’t have to log into a website to use it or download a special app. It’s all straightfoward through email, which for me makes it ten times easier because with an app, I know I would ignore the notifications to do it. I’ve downloaded tons of meditation apps over the years and never used them, but for whatever reason, this format works better for me (maybe because I’m on my email all day long and see it sitting there, staring at me, judging me for not opening it).

Another thing I love about the course is how the lessons build on one another. You learn a few techniques in the first few meditations that make the subsequent meditations easier to do.

With most meditations on YouTube or on an app, there’s no real progression–it’s just random.

Another thing I like is that there’s a cost associated with it. Now I got it for free, but even though it was free, I still feel the value of it because I know it costs money, and that feeling pushes me to not waste it.

After spending 6 years in marketing, I know that this is a phenomenon. Half the reason you think a luxury product is luxury is the price, even if the materials are lower quality than another product.

Paying money for something and then not using it feels wasteful, and that pushes you to keep using it because you feel that there’s value to the product. By contrast, a YouTube video is free, so why bother with it when you don’t feel like it?

So far, the first week has been great. I’ve felt pushed to meditate each day, if for no other reason than to get that unopened email out of my inbox.

In a short time, I’ve been forced to develop a habit of meditation, which is awesome.

Rory talks a lot in the course about stopping drinking (obviously), so I just kind of ignore that part, but his voice is pretty soothing, so when he talks about changing bad habits etc, I just listen and feel relaxed.

I’m super happy with it and can’t wait to report in on how the second week goes.

Check Out the We Meditate to Quit Alcohol Course

Full disclosure: if you end up buying this course, I get a percentage of the purchase, but I can tell you right now that I wouldn’t recommend this if it wasn’t helping me and if I didn’t believe in the product.

You can check out the course here.

If you end up trying it out, I’d love to hear your experience. Leave me a comment and let me know if it’s made as much difference in your meditation practice as it has in mine.

Subscribe
Login
0 Comments
Inline Feedbacks
View all comments
previous13th Stepping | The Biggest Danger in AA
nextGod and the 12 Steps–Should God Be Taken Out of the Literature?

Recovered Alcoholic vs Recovering Alcoholic | What Do They Mean?

Read More »Recovered Alcoholic vs Recovering Alcoholic | What Do They Mean?

Tramadol is an opioid painkiller with a lot of abuse potential, which means that Tramadol withdrawal can be similar to withdrawal from any other opioid,…

Read More »Tramadol Withdrawal Can Be As Bad As Heroin Withdrawal (or Worse)
wpDiscuz
0
0
Would love your thoughts, please comment.x
()
x
| Reply