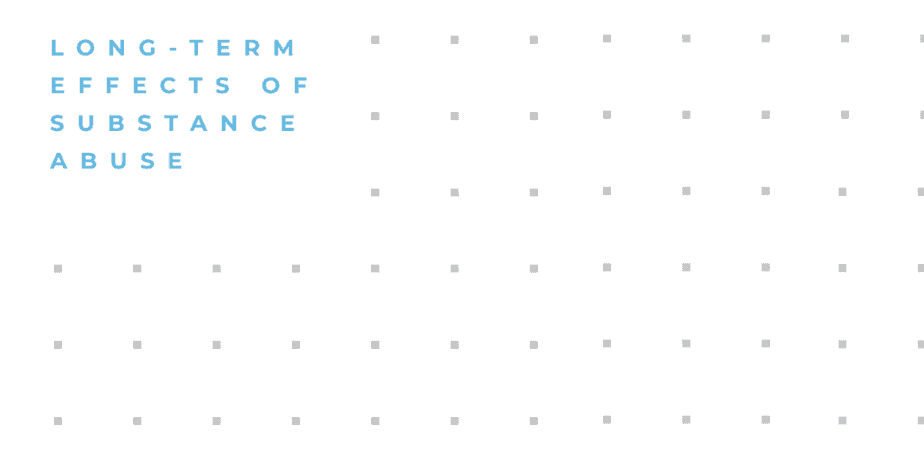 When you use drugs for a short time, you may not experience negative repercussions, but any length of use exposes you to possible long-term addiction and potentially devastating effects.

Knowing these long-term effects of substance abuse may help stop you, or someone you love, from using drugs.

It is never too late to stop. You can always make a new start after addiction.

Effects of long-term substance abuse on the body

You can inhale, inject, or take by mouth, drugs and illegal substances.

Long-term use of drugs such as tobacco predisposes you to lung disease, including chronic bronchitis and lung cancer. Inhaling or smoking drugs like marijuana can also cause breathing difficulties.

Drinking alcohol and other liquid drugs, such as codeine cough syrup, can cause kidney degeneration. Over time, your kidneys stop being able to filter out toxins, especially after years of substance abuse.

Once your kidneys start degenerating, sooner or later, they fail. You may get a transplant if you’re lucky. If you’re not, you die of kidney failure.

Using substances like cocaine and opioids can be hard on the gastrointestinal system, causing ulcers, constipation, and damage to the intestines.

While all these problems are internal, substance abuse can also affect your outward appearance. It is quite common for drug abusers to have bad skin, look thin and unkempt, and generally seem unhealthy.

Malnourishment is quite common among substance abusers as they do not eat well and are only interested in taking drugs or drinking alcohol, making them susceptible to infections and diseases.

It Starts in the Brain

The destruction of the body is nothing compared to the long-term effects of substance abuse on the brain.

The brain consists of neurons that control the flow of information. These neurons form a network that sends signals to each other and other parts of the body, such as the nerves, helping us to function.

When we take substances like opiates, they attach to these neurons and send abnormal messages. For example, they may trigger stressful feelings, hallucinations, or lead to reduced impulse control.

Substance abusers are often not in control of their thoughts and actions, leading to abnormal feelings of anxiety or depression.

The Long-term Effects of Alcohol on the Brain

The feeling of pleasure that results from drug use contributes to addiction. The constant need for drugs and other substances becomes the focus as users chase a high. Chasing that feeling takes all your resources, strains your relationships, and interferes with every aspect of your life.

After prolonged drug abuse, you will damage your brain, resulting in short- and long-term memory loss. You can also have difficulty thinking due to impaired cognitive function caused by exposure to toxins from your drug of choice.

If a substance abuser suffers from impaired mental health, the long-term use of substances can worsen the situation. Drug use can also trigger mental health problems in susceptible people. When this mental anguish becomes unbearable, many substance abusers commit suicide or die from an overdose.

Substance abuse can also contribute to mental problems in old age, such as dementia caused by brain cell degeneration.

Brain degeneration occurs because neurons cannot regenerate as required when one is ingesting drugs and other substances. So, even if substance abuse does not destroy your life when you are young, it can cause you and your loved ones severe suffering when you grow old.

Apart from the physical effects that long term drug use causes, it also leads to social problems.

For starters, a drug user will have difficulty holding onto a job. Many lose their income to drugs, and once their money is gone, they turn to loans, which can lead to complete financial ruin. It means they cannot take care of their needs and those of their families. In this way, substance abuse destroys families.

Drugs are a significant contributor to crime. Criminal defense attorneys are often busy with cases of people accused of drug-related crimes. Between 2010 and 2019, there were over a million drug arrests, annually. Drugs are also a major contributory factor in many other crimes.

The substances that addicts take become their only focus, to the detriment of their relationships with family and friends.

Children miss out on a loving relationship with their parents once they become dependent on substances. Parents and siblings can not get through to substance abusers either, and those relationships get destroyed too.

As a result, substance abusers become isolated and lose out on the support that one derives from a close network of people who love them.

This is a never-ending cycle. The more isolated you get, the deeper into addiction you sink.

Substance abusers also destroy the lives of other people who are not a part of their lives. For example, many people die at the hands of drunk drivers, most of whom are alcoholics. According to NHTSA, between 2009 and 2018, over 10,000 people died, per year, from drunk driving accidents.

Addiction is a problem that not only jeopardizes your income and leads to relationship problems and crime but also has a negative impact on society itself.

The Long-term Effects of Substance Abuse Can Be Devastating

You can avoid the long-term effects of substance abuse if you choose to change. It is challenging, but users can detoxify in rehabilitation centers that help abusers overcome drug dependency.

Sometimes, it is hard for substance abusers to check in to a rehabilitation center. In such cases, their loved ones should intervene and help them get there. There are also private treatment centers for addiction for those who want to be discreet.

For substance abusers, the road to recovery starts by choosing to change. Once you make that choice, with the love and support of your family, your friends, and people in support programs like AA, you can turn away from substance abuse and avoid the long term negative consequences.

To learn more about how to stay sober and avoid these serious consequences, check out these 11 tips to stay sober.