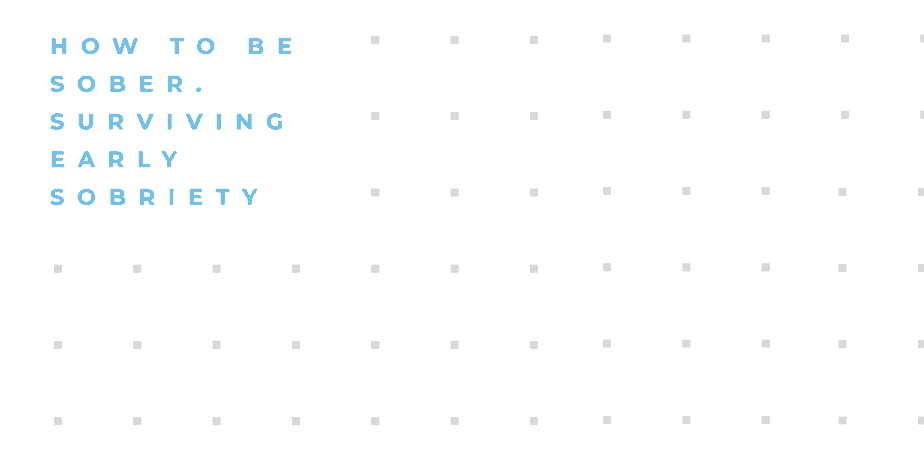 Learning how to be sober is tough, especially when you’ve been drinking/using for years or decades, but surviving early sobriety doesn’t have to be as difficult as you think.

Addicts and alcoholics are survivors, but nothing takes survival skills quite like recovery.

Getting off drugs and alcohol is so hard. Getting that first step down can take years or decades. Anyone who thinks this stuff is easy is either still smoking something or is flat-out stupid.

Honestly, I consider my first 2 years sober to be my early recovery. That was the most difficult time of my life, even more difficult than the months of hell that came before, because I didn’t have substances to wipe away the pain of life.

I just had to live it, and I had not lived in a very long time.

To get through those first 2 years, I had to work hard—really hard. I can look back today and say that it was worth it. I was given these tools by a variety of people, and they helped me to make it to the point where the fire was put out and the emergency was over.

Here’s what helped me survive.

1. How to Be Sober—Meetings Helped Me Survive Early Sobriety

I know it’s a little cliche, but I can honestly say that going to meetings saved my life.

But the reason they helped me to survive early recovery is more than just the spiritual aspect of the 12 steps. Sure, that’s there, but to me, it was much more about the support I got there, the understanding of other alcoholics and addicts who understood what I was going through and were there to help.

Meetings honestly changed my life. I moved to Texas and knew nobody outside my family. My youngest brother was the only person I hung out with while I was using, and he was in his teens.

When I started going to meetings and trying to get sober, I met people my age who were doing the same thing. Seeing peers who wanted to change their lives as much as I did gave me a lot of hope.

Seeing people my age with years of sobriety gave me even more hope.

But more than all that, it gave me a supportive community. People I could hang out with, talk to, who were understanding and who were there for me.

Without them, I don’t think I would have made it.

Which brings me to my next tool.

Hanging out with people in person is ideal and what I did a lot of in early recovery, but with COVID ravaging the world, we have to be more creative. But even when I got sober in 2011, I still called my friends a LOT.

I couldn’t find a job when I was in early sobriety because of my criminal history and some pending charges, so I had a lot of time on my hands.

Time to an addict like me, especially in new recovery, can be poisonous. I get antsy. I’m the kind of person who always needs to be doing something. Sure, it’s good for me to relax, but I’m just not good at relaxing, and I certainly wasn’t when I had 30 days sober. I tried to get back into my hobbies, but that was really hard to do because my brain was still fried, and I associated a lot of my hobbies with drinking and getting high.

One of the best ways I found to occupy my time was not just to hang out with friends but to call them. Regularly.

Now I was also calling my sponsor, and that helped tremendously, but that poor man couldn’t be expected to talk to me all day long. I needed more people to talk to if I wanted to get out of my head.

They were also calling me to get out of their heads, which leads me to my next tool.

3. Helping Wherever I Can Is a Big Part of Surviving Early Sobriety

I was told by my sponsor and by people in meetings who knew what they were talking about that one of the best ways to get out of your head (where I found myself spending way too much time in early sobriety) was to be of service.

It was a funny phrase and still sounds a bit funny to me, but being helpful made a weird sort of sense.

Plus I’d never done it much in my addiction, and I believed earnestly that it would work because I was so desperate to stay sober, so I tried it.

I honestly believe that trying to help other people has kept me sober the last 9 years. For me, that meant going to rehabs and sharing my story early in sobriety (I started when I had 45 days).

But it wasn’t just helping other addicts. I helped wherever I could. I helped at my homegroup. I helped my teachers at school (I went back to college since no one would hire me). I helped my parents and my friends.

I was of service, and it kept me out of my head, which was the most dangerous place for me in early sobriety. This is how to be sober guys.

Sobriety Is Tough—Here’s How to Be Sober Long Term

These are just a few of the tools I still use today to stay sober. I got sober in 2011, and they’ve served me well.

I made a full list of all the stuff I do to stay sober today that you can download for free.

So inspiring to read your posts. I admire anyone who lives their truth.

Thank you! I really appreciate you reading, and if it weren’t for your classes, this blog would be a grammatical disaster lol!

Read More »What Does Detox Feel Like? Spoiler Alert | It’s Not Fun

Is Ambien Addictive? Definitely | I Was Snorting Ambien

Is Ambien addictive? My experience is that it is — I even started snorting Ambien. Ambien is habit forming as far as I can tell.…

Read More »Is Ambien Addictive? Definitely | I Was Snorting Ambien

Addiction Recovery | Is It Possible to Recover From Addiction?

Is addiction recovery possible? Can you truly recover from addiction? The answer is yes — you can recover. What Addiction Recovery Means in Practice Addiction…

This website uses cookies to improve your experience while you navigate through the website. Out of these cookies, the cookies that are categorized as necessary are stored on your browser as they are essential for the working of basic functionalities of the website. We also use third-party cookies that help us analyze and understand how you use this website. These cookies will be stored in your browser only with your consent. You also have the option to opt-out of these cookies. But opting out of some of these cookies may have an effect on your browsing experience.
Necessary Always Enabled
Necessary cookies are absolutely essential for the website to function properly. This category only includes cookies that ensures basic functionalities and security features of the website. These cookies do not store any personal information.
Non-necessary
Any cookies that may not be particularly necessary for the website to function and is used specifically to collect user personal data via analytics, ads, other embedded contents are termed as non-necessary cookies. It is mandatory to procure user consent prior to running these cookies on your website.
SAVE & ACCEPT
wpDiscuz
4
0
Would love your thoughts, please comment.x
()
x
| Reply