Home » Addiction Blog Posts » If You’re Wondering How to Get Sober, You Need to Do This Right Now

If You’re Wondering How to Get Sober, You Need to Do This Right Now 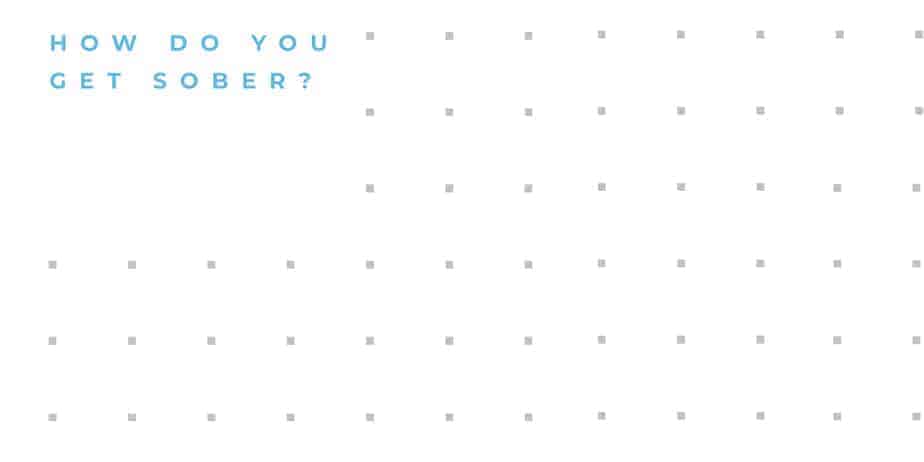 How do you get sober? As someone who has struggled with substance abuse, this is a question that I have probably asked a hundred times.

Perhaps you are asking because you have a spouse or family member who can’t seem to be able to go a day without being drunk or high.

I am sure people have gotten and stayed sober in many different ways, so know that this is based on my personal experience alone and the suggestions I received from people close to me who have gone before me.

If You’re Wondering How to Get Sober, This Is the First Thing You Need to Do

I think that probably the single most important thing in all of this is being able to recognize complete powerlessness over drugs and alcohol.

When someone asks me, “how do you get sober,” I tell them how important it is to recognize this.

Powerlessness can present itself in many different ways. For me, I started to come to terms with this when I started to experience awful consequences as a result of my drug use.

That has come in the form of overdoses, hospital visits, psych ward visits, problems with the law, as well as destroying relationships, including family, friends, and previous girlfriends.

Once I take a drink or a hit, I seem to not be able to stop until something presents itself in the form of a wall.

Most people call that a “bottom.”

This can apply to a person who has a partner, friend, or relative that has substance abuse issues. It’s important for you to realize you are powerless over their disease just as much as they are.

Going to AA Helped Me to Get Sober

Once I realized I was powerless, my best idea was to go to an AA meeting. I introduced myself as a newcomer, and that night I ended up getting a sponsor.

Aside from hitting rock bottom and recognizing that I was gonna die if something didn’t change, getting a sponsor was the second most important decision I could have made.

I was out of ideas, and luckily I was in enough pain to where I was willing to take whatever suggestion my sponsor provided me with. I was dependent on opiates, and he suggested to me that I should go to treatment for the sake of being able to detox safely and have enough separation from the drug to where I wasn’t out in the free world while going through the detox process.

Being in withdrawal from opiates isn’t very fun, and I always would tap out by day 3 while after having not slept for 72 hours. I stayed in treatment for 2 months.

Here Are the Things I Tried

I tried various methods in trying to stay sober over the years. From going to church, practicing meditation, to eating healthier and working out, but I can honestly say that none of any of that worked.

I called my sponsor on a daily basis while I was in treatment. One of the best suggestions he gave me during all of that was to always make sure I made my bed and prayed in the morning. He encouraged me to always ask God (or my Higher Power) every morning to not help me stay sober, but to KEEP me sober.

For instance, my granddad has been sober since 1984. He was probably one of the most hardcore alcoholics ever.

His bottom came in the form of a head on collision and having his doctor tell him that if he didn’t stop drinking immediately, that he would surely die sooner than later.

I think having heard his experience created a little obstacle for me. I thought if he could do it by willpower alone, that surely I could.

I always have been able to conquer whatever it is in life that I choose to. I could never understand why it was that conquering addiction was an exception to that.

I got back into attending meetings as soon as I was discharged from treatment. I started the process of going through the 12 steps and meeting with my sponsor to read out of the big book of Alcoholics Anonymous on a weekly basis.

It has been such a radical, life-changing experience. It makes me grateful for my past, having brought to me where I am in life today. This process isn’t black and white, and I am still very far from perfect. I have had slips while being in recovery. The most important thing has been to just be as honest as possible about all of that kind of stuff. Speaking stuff out loud tends to take the power away.

This Is My Experience Getting Sober — What’s Yours?

This is my experience with getting and staying sober.

There are plenty of resources out there that are available for any person wanting to get sober and turn their lives around.

The same goes for family members who are close to a person with alcoholism.

You’re not alone and being in a group of people with similar experiences is so crucial.

How did you get sober? Are you still struggling to get sober? Let me know in the comments. Let’s talk.

Subscribe
Login
0 Comments
Inline Feedbacks
View all comments
previousThe Use of Yoga for Addiction Recovery in Treatment
next12 Steps Without God — Is It Possible?

Ryan Henderson is a magician and mental health advocate.