I Was Addicted to Weed — This Is What It Was Like 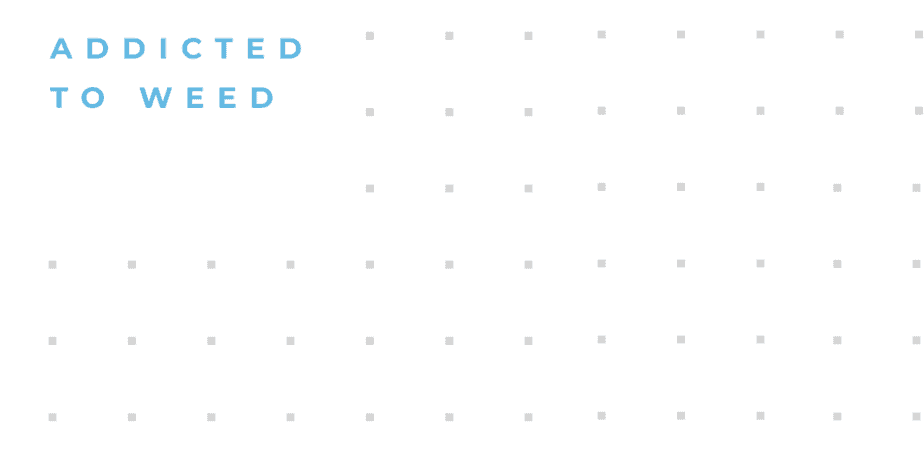 This what it was like when I was addicted to weed.

I’m in an outpatient psychiatric facility, a partial hospitalization program I signed up for after a second suicide attempt. I’m smoking weed before I go in every morning, and I’m smoking as soon as I get out.

They have a little questionnaire that you fill out every day. One of the questions is “Did you do any illegal drugs today?”

I’m in Texas, so weed is most definitely illegal. I answer yes each morning. During group therapy each day, they ask me the same strange question:

“Can you just not smoke weed tonight?”

The answer is always no.

I thought I was doing pretty good by not taking any pills, not drinking, not doing any hard drugs. My depression was nowhere in sight thanks to getting on the right medications (Effexor was the one that did it for me).

At this point in my life, I didn’t want to quit smoking weed. I just wanted to not do hard drugs, and smoking weed seemed like a good alternative.

I figured I could stop if I wanted to. I’d just never wanted to.

Another patient in my group therapy session asked me if I could stop. I said, “Well, you see, the thing is—” and he cut me off and said.

It pissed me off, but he was absolutely right.

I didn’t think I was addicted to weed.

When I tried to quit a few months later, I found out I was.

I Couldn’t Figure Out How to Quit Smoking Pot

My partial hospiatlization program switched me from the psychiatric unit to the addiction unit a few weeks in.

One of the counselors said to me on the first day that, “You know you have to pass drug tests to stay in this program, right? And you have to go to 12-Step meetings.”

“Sure thing,” I said, knowing full well I had no intention of ever stopping.

Plenty of people use marijuana for pain, for seizures, for a variety of illnesses, and I don’t think twice about whether they have a problem or not.

I learned soon just how much of an addict I was. When everything was taken away, and all I had was weed, I got addicted to that too.

I had a sober friend give me his piss every day. I put it in a 5-hour Energy bottle, wrapped it with those little heating pads you use for your hands in snowy weather, and stuck it in my pocket along with a thermometer each day before going to the psychiatric facility.

But I wasn’t addicted to weed.

I started going to AA. I figured I could quit smoking, just not right now. I just had to go to AA for PHP, and then I could stop going, and I could smoke the whole time, so who cares?

In AA, I made friends. They were all sober, and some had been sober for a while.

I wanted what they had. I wanted to quit.

I tried and tried.

It’s a strange feeling to realize that you can’t handle a drug you thought you had no problems with, a drug that you didn’t even think was a drug.

It was always clear to me that I had a problem with drugs like OxyContin, but I thought that weed wasn’t even addictive.

It is. For sure. I tried and tried to quit on my own. I worked with my sponsor despite getting high every day. After a while. I realized I was getting high against my will.

I wanted so bad to stop. I couldn’t believe weed brought me to my knees the same way opiates and uppers did. It felt so insane, and that’s probably because it was.

I broke down one day. I had just done a 3rd step with my sponsor. I was going home, and I knew when I got home that I was going to get high and that there was nothing I could do about it.

I went up to my bedroom in my parents’ house, dropped to my knees in tears, and prayed, begging a god I barely believed in to take this away.

It was one of the most bizarre experiences of my life. I’d never felt anything like it. One second I was obsessed with getting high and knew I was going to do it. The next I couldn’t care less about it.

It didn’t last. I gave up on my program after 3 months sober, and I relapsed after 5 months.

Guess what I relapsed on?

It only took a few months to get back to the hard shit.

I couldn’t put weed down. I couldn’t moderate. For me, it had to be entire abstinence.

For Most People, Weed Is Okay — They Won’t Get Addicted to Weed

I have to stay away from weed, but for many others, weed is a wonderful drug that can help them physically and mentally. For many others, it’s a drug that they don’t abuse. It causes no problems in their lives.

They don’t smoke it and crave heroin like I do.

Weed is a problem for me, but I would never tell someone with chronic pain that they can’t use marijuana prescribed to them by a doctor.

And I wouldn’t tell anyone buying it illegally in states where it’s still illegal that they can’t use it for pain.

Everyone needs to make their own decisions about it.

But if you are the type of person who realizes they are truly addicted to weed, then it might be time to find help.

And no matter what anyone says, your addiction is as valid as any other.

Hey Adam. I really needed this article today. My now ex-wife is going through meth addiction. That’s why we divorced. She doesn’t want to stop. Hopefully there is light at the end of the tunnel somewhere. Her parents and adult daughter are worried every day about her. I’m living in another town because I can’t deal with it anymore. Hope you are well, brother.

Hey man, so sorry to hear you’re going through that! There IS light at the end of the tunnel. I will pray for her and for your whole family. I hope she gets well. Reach out if you need anything man. Awfout@gmail.com

Read More »Why Is Being Sober So Boring?
wpDiscuz
2
0
Would love your thoughts, please comment.x
()
x
| Reply