Home » Addiction Blog Posts » 12 Steps Without God — Is It Possible?

12 Steps Without God — Is It Possible? 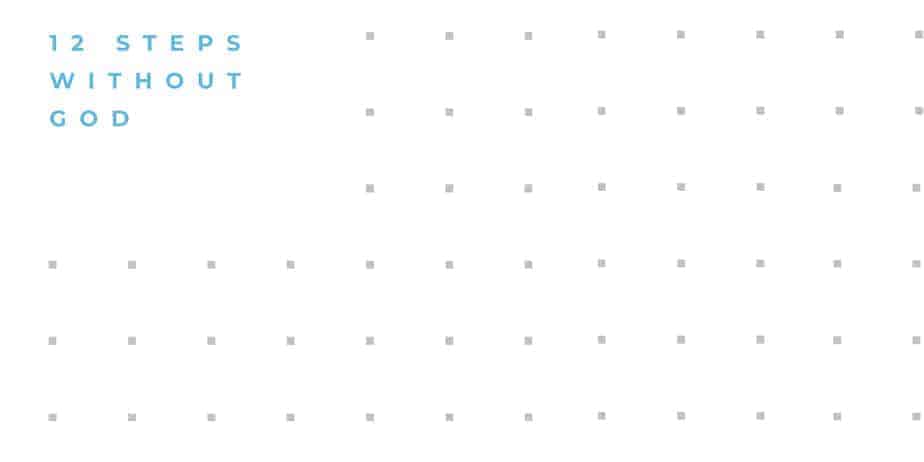 The 12 steps without god — can it be done? It’s a question I’ve asked myself on numerous occasions, the main reason for which is that I don’t believe in god.

And yet I stay sober.

What does that mean?

Here’s what I want you to remember—god is defined in a specific way in the 12 steps:

A power greater than ourselves.

Keep that in mind as we talk through this.

Here’s how I work the 12 steps without god, and here’s what that means to me.

First of all, it’s important to define “god” before I can explain how I work the 12 steps without god.

Now it’s important to note that there are plenty of religions that have many gods. Those gods are not all powerful, that are not always good, or that aren’t good at all. In those religions, gods seem to act just like humans (only very powerful ones).

Those ideas of god I reject. This is just my opinion, but I don’t think there are any beings out there that would fit the definitions of gods.

Am I right or wrong? There’s no way to say. That’s just my belief.

So, how do I work the 12 steps? I focus on the wording of the steps.

Step 2: Came to believe that a Power greater than ourselves could restore us to sanity.

And here’s where things get dicey.

For all I know, that power is me.

How Do I Know What This Power Is?

I gotta be honest—I envy people who are able to define their higher power, who know the moment you ask them what God is, who God is to them, why their God has a capital G, what books are associated with their God, etc.

It just seems like such a simple, easy answer to the god problem.

For me, it’s just never been that simple. I’ve never had proof that the god of any religion exists.

That being said, I have had proof of something otherworldly and powerful working in my life.

Here’s what I can say about my higher power:

That last one I am not sure of at all.

Mostly, my higher power is a mystery.

How do I know that it exists in the first place?

Because I am sober, and have been for years, and this is a miracle.

If a miracle is something impossible that is nevertheless true, then me being sober is a miracle.

At the age of 17, I started using drugs and drinking, and I didn’t stop for a single day until the age of 26.

Wait, that’s not quite right. I had a three day period somewhere in my early twenties where I was so dopesick that I couldn’t get out of bed to get the drugs I needed to get high.

As soon as I could move, I got high.

That’s how heavy my addiction was.

When I got sober in 2011, all I could think about was getting high. I was confined in a rehab that I couldn’t leave. I wanted to get high more than anything.

I was terrified of getting high again.

So I got a sponsor, and I worked the 12 steps, and something strange happened.

That, to me, is miraculous.

All That Matters Is That You Try

I don’t think what keeps me sober is god, not the way people define god.

I just can’t believe in an all powerful, all good god. The world that we live in doesn’t look very good. It’s hard for me to believe that a being that’s all good and has the power to fix things wouldn’t do so.

Other religions make about as much sense. I’ve never seen evidence of any sort to show much that there’s a true “higher power” that rules over the entire world.

The best way I can describe my higher power is that it’s literally like electricity—it’s some force that I’ve tapped into, somehow, that’s keeping me sober.

I say tapped into because, before, I tried and tried to stay sober on my own and couldn’t. I suppose it’s possible that somehow I overcame whatever the problem was before and got sober on my own willpower, but it doesn’t feel that way.

What is that something else?

I didn’t care how it worked.

I cared that it worked.

I never researched drugs deeply before I did them—I just did them, and they worked, and that was good enough for me.

I just did them, and I let the higher power problem sort itself out.

It’s fully possible that my higher power is some kind of god or something, but if it is, I’ll never know.

All I know is that I work the 12 steps, and something causes a miracle to occur—I stay sober.

The 12 Steps Can Work Without God

If you don’t believe in god, but you need to get sober, try the 12 steps.

What can it hurt?

What do you have to lose?

If you’re struggling to stay sober, check out my 11 Tips to Stay Sober — grab it for free here.

No comments?!?! The steps work perfectly without god. I have been sober for over 4 years now. I am an atheist. I hated the word god and know that it is a religious program based on religious principles. The word god is on every other page, we say the lords prayer, and the higher power and god of your understanding were put in after the fact. BUT, that’s ok. I always take what I want and leave the rest. I am glad i cannot define my higher power because I feel that would limit it. The best definition I have is that it’s the feeling I get when helping others and find out new ways of looking at stuff. Its the power of talking to others and feeling welcomed. These feelings i cannot prove, but I know they’re there and have changed my life for the better. I can say god and know what it means to me, and it will mean something else to others. As an atheist, I am not limited to any particular faith tradition’s definition or image of god. That is freeing. Thank you for this blog!

Thanks for commenting Jonathan! I agree completely—you don’t need to have a god in your life to work the steps. They work just fine without them! I’ve found that anyone can get sober if they just find a higher power of some sort, no matter what it is. Thank you for reading.

wpDiscuz
previousIf You’re Wondering How to Get Sober, You Need to Do This Right Now
nextJapa Meditation and Mantras | How to Get Started

Read More »Why Is Being Sober So Boring?
wpDiscuz
2
0
Would love your thoughts, please comment.x
()
x
| Reply